Wow, it has been a ridiculously long time since I last blogged!  Fear not, you haven't missed anything, because I really haven't accomplished anything.  I've been consumed by a persistent case of indifference towards anything crafty for no good reason.  I just haven't felt any inspiration to even continue projects that are already underway.  I've kept myself busy taking walks, reading, doing crossword and sudoku puzzles, so I haven't been totally idle.  I managed to rouse myself enough to clean out my two flower gardens, which absolutely slayed my back for a few days.  Nothing to show yet, but some greenery has popped up.  We've also had some incredibly warm days, at least for the coast of Maine, plus a few snowy ones, also not unexpected but never welcome.

Last weekend I had decided that I needed to get out my inkle loom to make a gift for one of my sons.  At first I couldn't quite find the path that gave me the length I needed, then thought I had solved that issue.  The pattern requires lots of cutting and tying, and I set it up at the kitchen table, which meant I was bent slightly at the waist to do this.  That was a HUGE mistake, as it caused a lot of back pain that has lingered since then.  I have arthritis in my lower back from an old injury from a car accident in 1993, so I'm used to this, but since I can no longer take anti-inflammatories, it is much harder to deal with.  Also, the path I came up with wound the warp around the heddle peg, which is a huge mistake That I missed.  I know better, but it has been years since I've used an inkle loom and I forgot.  This larger loom, a Harp, was advertised as holding up to 72 inches, so I thought it would work, but that length is only achievable when using it for tablet weaving (no heddles).  What a dope!  So, it sits upstairs, 2/3s of the way warped, taunting me for my absent-mindedness.  I guess I will have to weave the band on my floor loom which I had already dressed with my gradient handspun for a woven shawl.

This yarn has been sitting on the warp beam since the beginning of April, when my get up and go got up and went.  Because I now have a reason to weave it off, I started threading today and have all but 5 sections done. 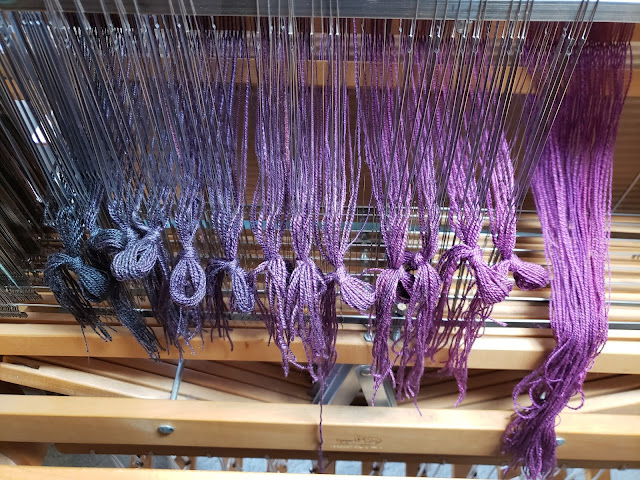 I'm hoping that I keep feeling motivated, since handspun does weave up fairly quickly.

My hubby and I are fully vaccinated now, which is a huge relief.  We are still following the rules, distancing and wearing a mask when in public.  I have met a small group of women for a few walks lately, and have still worn my mask, but after checking with the CDC I will probably stop that next time.  Everyone is vaccinated, and we meet outside, so it should be fine.

Other than that, I keep working on my fiddling, and got to "attend" an online music festival called "Fiddle Hell."  Funny name, not sure why it is called that, but there were huge numbers of instructors for many different instruments and musical genres.  The online aspect of it actually works well for me because of my lack of confidence, as well as the fact that we can re-watch the videos of the Zoom classes for up to 3 months.  There was an amazing concert on Saturday night, and I still have so many classes to view.  Tons of fun.

I also just submitted forms so that I can start volunteering at our local vaccine clinic.  I wanted to do it earlier but really didn't feel safe enough, even though PPE would have been provided.  My preference would be to administer the vaccine, but my basic life support certification has expired, and vaccinators need that.  I could take a class, but that would delay things and also hurt my back, so I'm sure they will find plenty for me to do.  I expect to hear back soon about scheduling and training.

That's all for now,  Hopefully there will be more to show shortly.  Keep safe, everyone!