I've recently finished a very quick and easy weaving project using sock yarn, the first time I have tried to weave with that material.  The yarn is variegated and a brilliantly bright color, and I decided to use plain weave to showcase the shifting colors.  For weft, I used 8/2 tencel and tried really hard to NOT beat too hard.  When I completed weaving, I first soaked it, then ironed it and laid it out to dry.  I wasn't too happy with the result - the resultant cloth felt much the same as it had straight off the loom.  Today, I threw caution to the wind, and tossed it in my washing machine on the "speed wash" setting using warm water.  After the wash, it went into the dryer, first on medium, then on high for 10 minutes or so.  The cloth now feels more like what I imagined it would.  Unfortunately for you, no pictures yet, as it is a gift for a friend.  Remind me after the new year!

In the evenings I have been continuing to spin, trying to create yarn for weaving projects.  I am currently working on some tussah silk, which is a new fiber to me.  It was dyed by Bethanne at Allons-y! Fiber Arts and is so luscious! 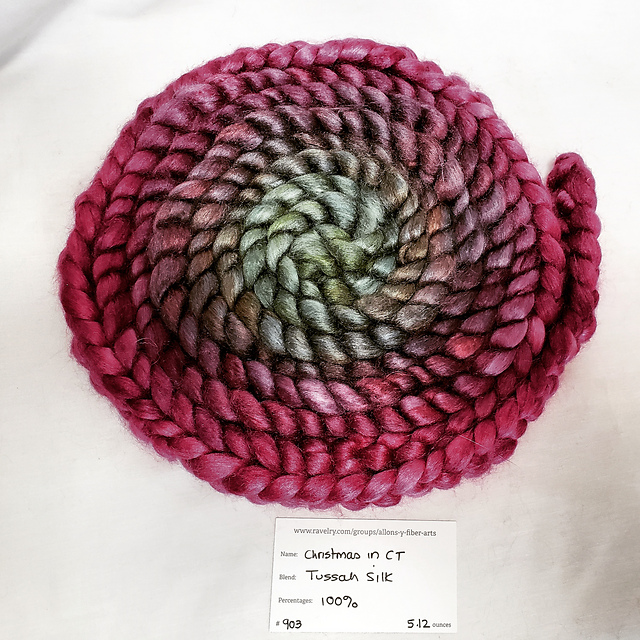 and how I separated the colors.  I have since separated each of these in two.  I envision a mirrored gradient scarf! 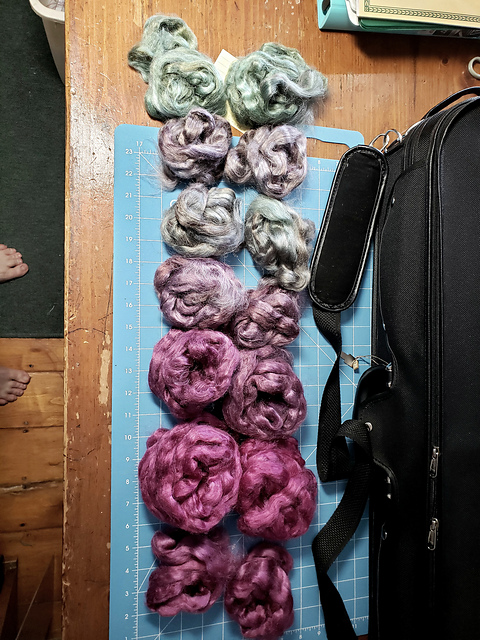 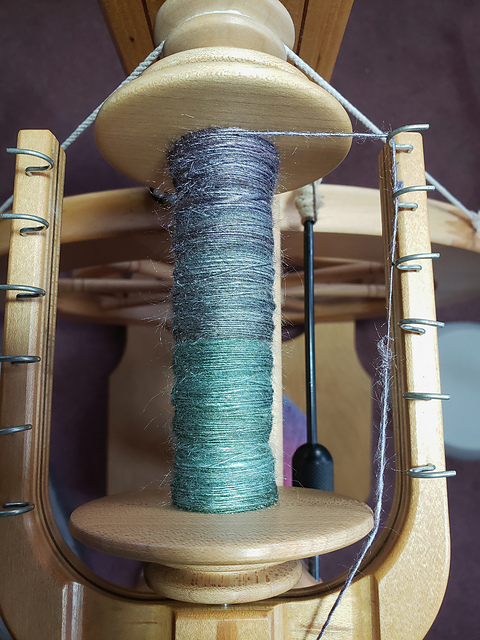 and the fourth layer.  After this, the colors reversed themselves; 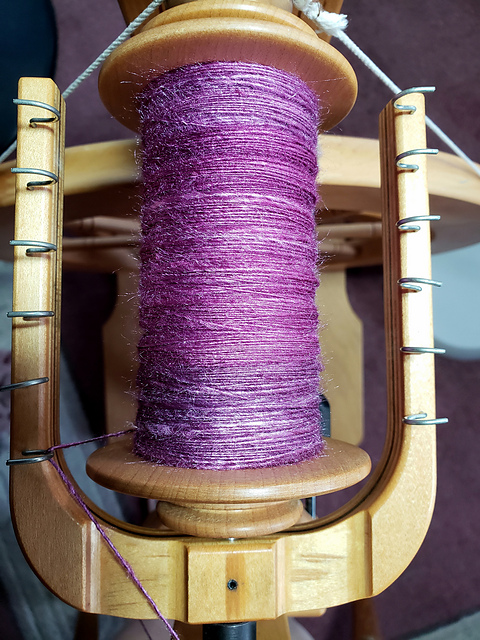 Last evening I finished the first half of the fiber, and the second half is all separated and ready to spin!

Other than that, we are just trying to get through these oh-so-very hot and humid days here in Maine.  Normally, our summer might have 1-2 days above 90 degrees, with an occasional 3 day stretch, but here on the coast, you could almost always count on an afternoon sea breeze that isn't always welcome (think early spring), but is lovely when it is really hot.  This summer, however, we are experiencing almost unrelenting heat and very high humidity.  We can't buy a rain storm lately, and our lawns and gardens clearly show that.  Fall has always been my favorite season, first because I had a bad allergy to grass growing up, so spring was miserable, but also because the air just feels so clear and devoid of humidity.  In that vein, Septembers, while mostly still one of the summer months, proved to be near-perfect - warm enough during the day, but cool at night (great for sleeping!), without the hints of the coming winter.  For the last two years, September has gotten warmer and warmer, so now the first couple of weeks in October have the characteristics that are so pleasant.  And yes, I do not like winter, so I should just stop complaining about summer, but nope!!  Thankfully, the next three days are forecast to be more comfortable, so I'm doing the happy dance over here!

This shot from my garden was meant to be posted earlier in the summer, when the flower was in bloom, but I think I forgot.  If I didn't, my apologies.  I just love the richness and depth of color on this delphinium!

Also, I usually try to avoid politics in this blog, but I have to say that I heartily approve of Joe Biden's running mate, Kamala Harris!  It is beyond time when a woman should hold such an important office, and to have a woman of color perfectly fits our times.  I sure hope enough other people feel the same way, so we can remove the present inhabitant of the White House and get back to the reality of this country's problems.  Maybe that's why I've been rewatching the "West Wing."  It's so nice to watch the government depicted as being run by sane and thoughtful people.

I've also been distracting myself listening to "Hamilton."  I paid for Disney+ for a month and watched it several times, and I really enjoy it.  When I first tried to listen to it a few years ago, after reading a review stating that the writer's 8 yr old daughter loved "Helpless," I couldn't get past the first 9 words of the album.  Twice.  I could not understand how anyone could like something like that.  After awhile I made myself listen further, and I'm really glad I did.  I am not a fan of hip hop, but there's something about the mix of songs and lyrics that grabbed me.  Seeing the performance made it that much better, but for now, I've decided to pay for it only sporadically.  The music is on a loop in my car, however!