A Change is in the Air

Hello all.  I know it's been a really long time since I posted - almost two months! - but it is not for lack of thought or for forgetfulness.  I've been going through something - I'm still not exactly sure what it is, but my interest in most things creative has taken a hit lately, so I've not had much to say.  Almost everything feels duller and less interesting.  Creative meals have gone out the window, weaving has stopped altogether, house cleaning...well, that was never top of the list anyway.  Work has been particularly difficult for me emotionally.  I still love what I do, but at the same time I really don't want to be there anymore.  It's all quite exhausting.  Yes, it sounds like I might be depressed, and while I'm aware of that and know what to do about it, I have yet to actually have enough oomph in the tank to take the next step.

The one craft fair that I go to, The Portland Fine Craft Show is happening soon, and I feel most un-prepared.  I have some hand-wovens to bring, but less than I ever have in previous years.  Some of that is because I have sold a few things to coworkers over the last few months.  Some is due to the fact that I watch my grandson one day a week, so one less day to weave.  I'm still working on learning the violin, which is certainly not easy.  But some is due to the funk that's been looming (ha) over me.  There will be some tea towels and scarves, key rings, place mats and a baby blanket or two.  There may even be some free stuff.  I think I may have to give up or at least cut way back on weaving to sell, so I may not be back in the craft show for a few years.  I might as well give away some things that have languished for a bit of time.

I may also get rid of the shop page on this blog, since not one person has used it and it does cost some dollars.  I think I will ultimately close my Etsy shop as well, since some of their policies have made it even harder than it was in the past to be found.  Their cut has increased a great deal, and now if you don't offer free shipping, your shop is placed farther down in searches.  This so that they can increase their profits.  I may move to Square, but that will certainly take a lot of effort.

I did finished the towel warp that I started several months ago.  Four are going to a friend for her wedding in a couple of weeks, and 4 will be for the shop, such as it is. 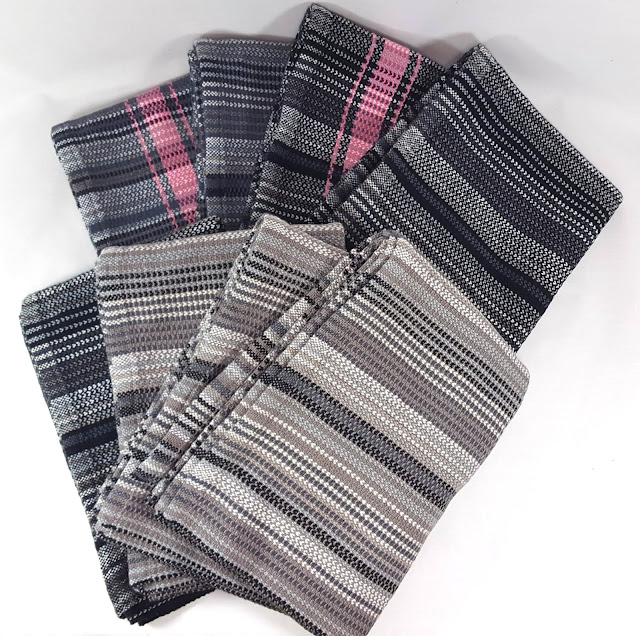 These are the towels being gifted: 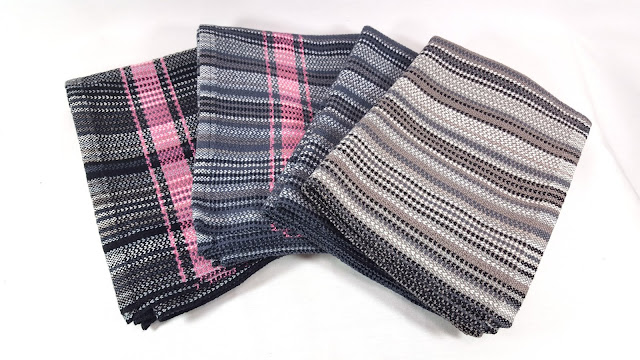 and these are for the shop, though they are not yet listed anywhere- two taupe and two black; 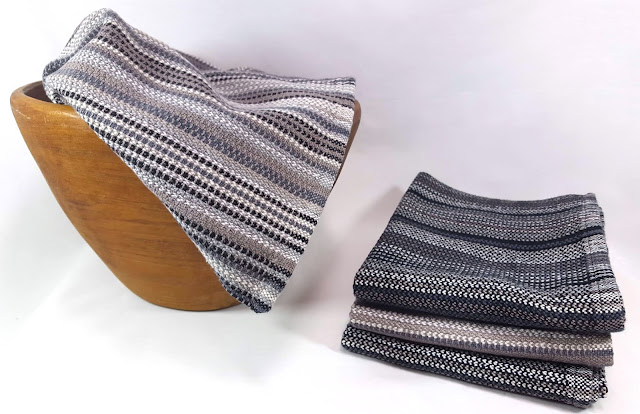 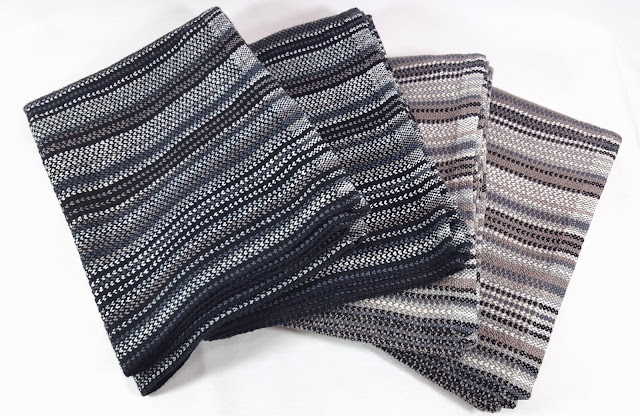 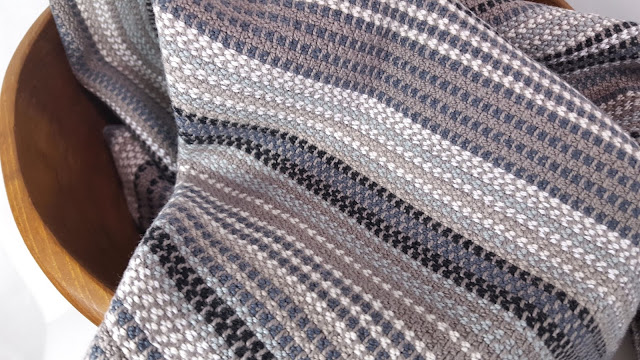 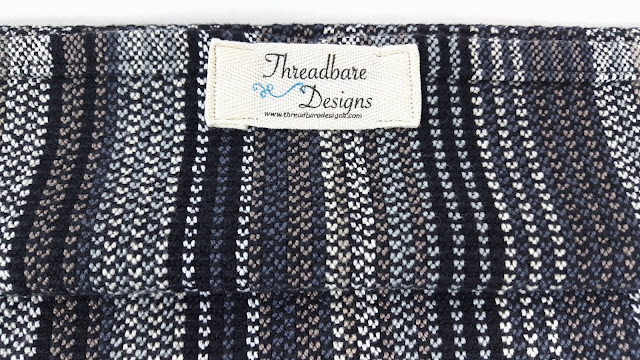 I do love this weave structure and the little hearts it produces.

My vegetable garden is pretty much non-existent this year, but I have had some nice color in the flower beds near the house.  Right now there are salvia and irises, cat mint, hostas about to bloom, with some tiger lilies for contrast.  Last week was the first time my delphineum bloomed, and my goodness, the flowers have not disappointed!  We planted them a few years ago, and I thought they had all died, but one came back with a vengeance this year.  I forget what the name of this particular variety is, but the deep purples and blues really speak to me and remind me of some of my favorite weaves.  They are almost iridescent. 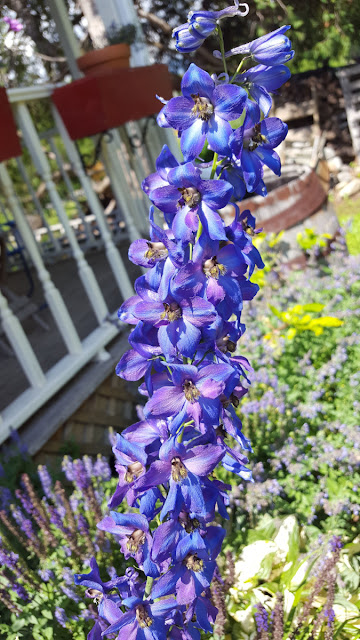 Last night, in a spur of the moment decision, we started to pull up the old wall-to-wall carpeting in the living room, which is where my big loom lives.  I started in the corner at the foot of the stairs, and of course there were old paint speckles from where the previous owners did not use a tarp when painting the walls.  We knew there was maple flooring under there, but so far it doesn't look to be in too bad shape.  We only did one little area because it got late, and of course it was very very dirty under there.  We had to pry up all the tack strips around the perimeter, and all of the staples holding down the foam padding.  Everyone was pretty hot and dirty, but we love how it looks so far.  This carpet was in the house when we bought it in 1987, and it wasn't new then, so you can imagine how old it is.  I will say, as uninspiring as a beige carpet is, it does do a good job of hiding dirt. 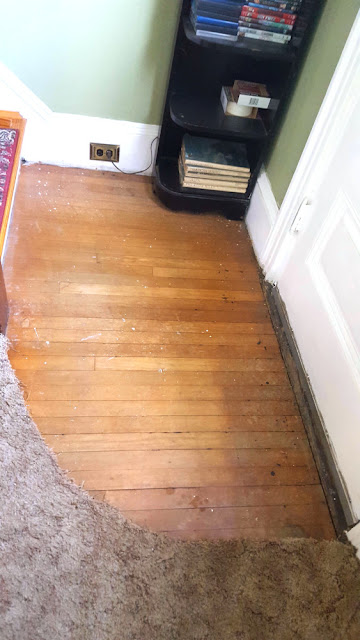 I'm not sure when we will get to the rest of the carpet - we may have to do this piecemeal, and there are many other projects that need doing, but there's something about a quality wooden floor in an older house that just feels right.

That's all for now.  Hopefully I'll snap out of whatever this is and get back on track.  If not, I guess I'll be back when I have something worth sharing.  Thanks for "listening."