I just finished weaving the two infinity scarves in polychrome echo weave, and boy, was that a work out for my treadling feet.  The draft only required 4 shafts and 6 treadles, but both feet were in play on different tasks.  My left foot alternated between two plain weave treadles every other pick, and my right foot went across 4 treadles in varying patterns.  A bit confusing at first, but once the pattern was cemented in my head, it flowed fairly well.

To review, the warp is tencel in four colors - lemon drop, grayed teal, eggplant, and burgundy.  One scarf used a black tencel weft, the other eggplant.  Here are some shots on the loom.

Black weft on the loom; 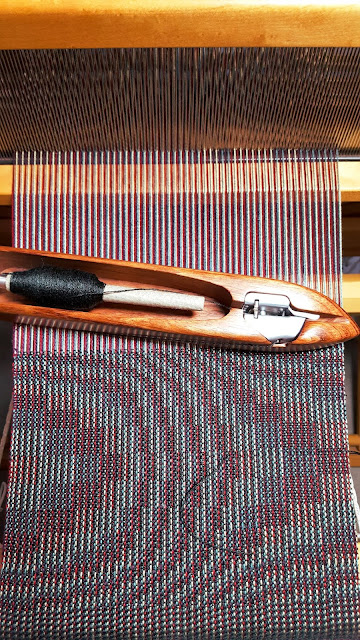 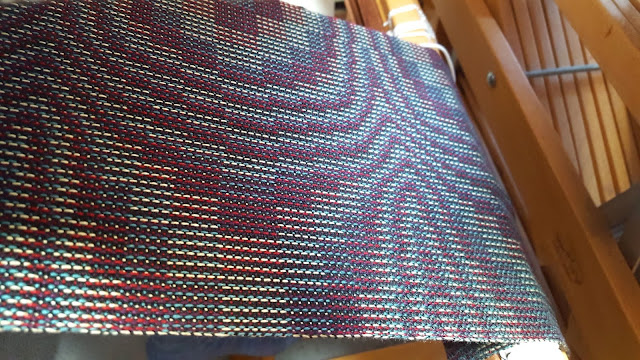 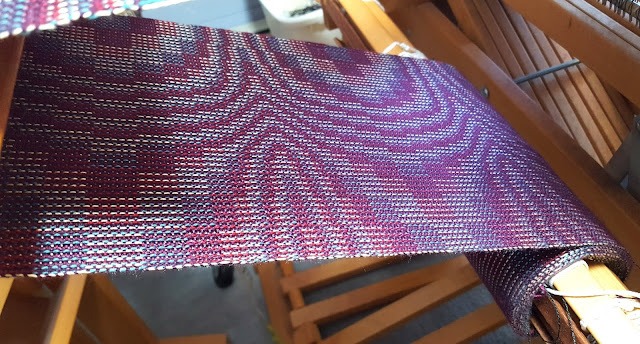 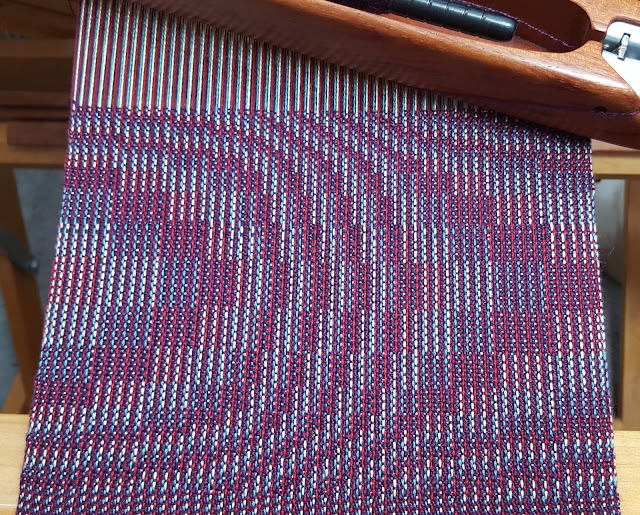 The colors aren't quite true, but close.

Today I got them off the loom, sewed the felled seams, washed them, and here they are hanging side by side drying. 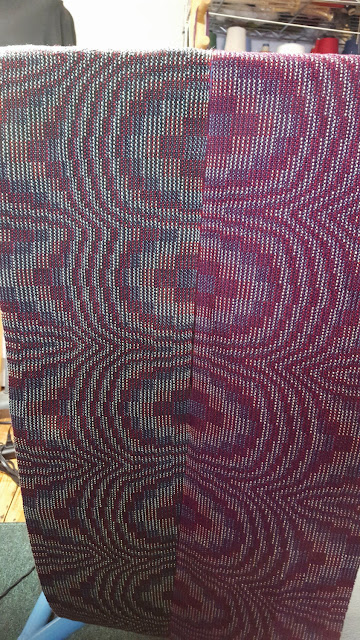 The other news is that the awful old aluminum siding on our old house is finally history!  We started the project probably 10 years ago, with the plan to do a side per year.  Hubby, being a wooden boat guy, really wanted wooden clapboards put on, to return the house to it's original siding.  Tyvek and blue board insulation were installed on the first two sides, which we did ourselves.  Then several years went by, and we hired someone to do the third side.  In this iteration, blown-in insulation was used, and some had to be taken out because our old plaster walls were bulging.  There were some disagreements about aspects of that job, so for the final side we didn't want to hire the same contractor.  We found another one that we absolutely love - he's courteous, efficient, has a great crew, and the work got done quite quickly.  They were very good about cleaning up every day, and the whole job took less than two weeks.

Here is the before photos - you can see that some of the aluminum has blown off in storms; 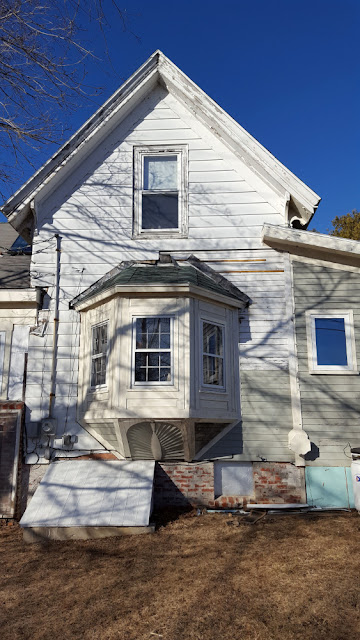 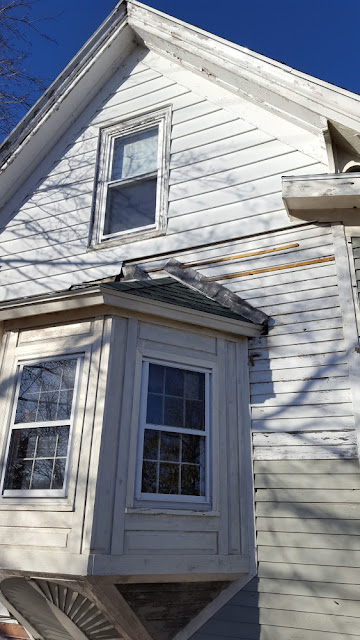 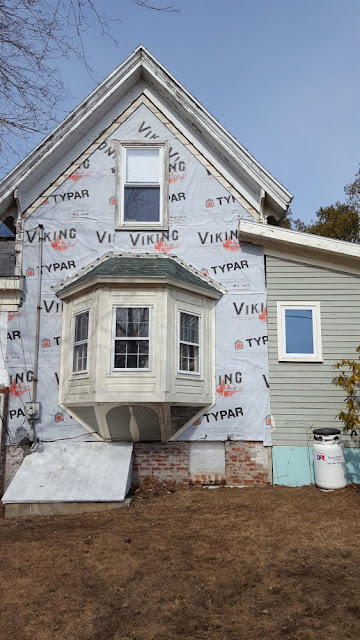 Then came some thin blue board.  We already have a bit of blown-in insulation on this end; 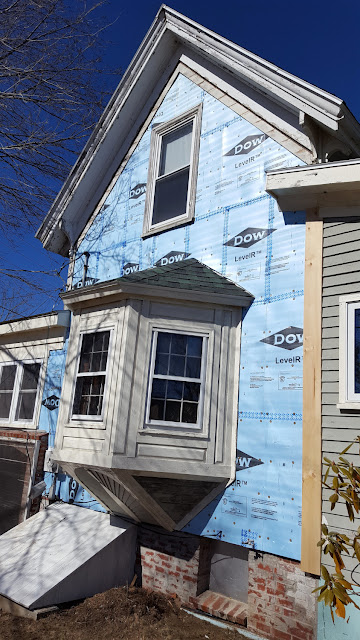 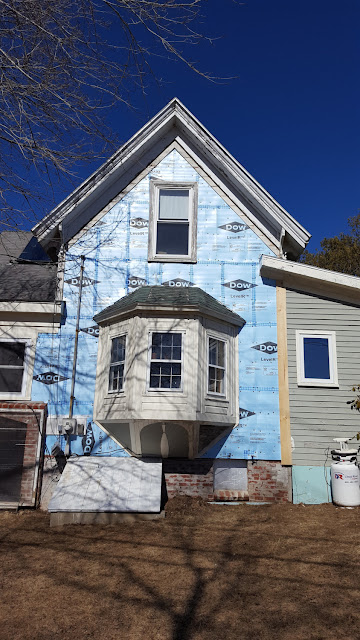 Soon the clapboards went on; 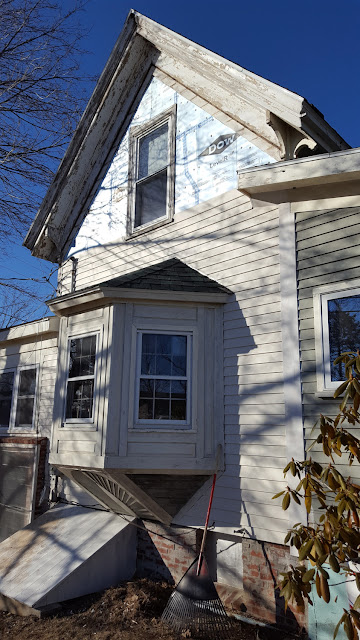 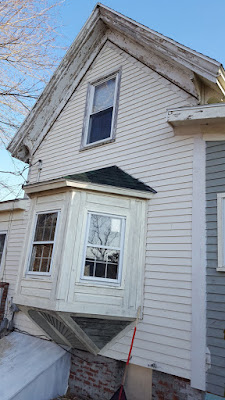 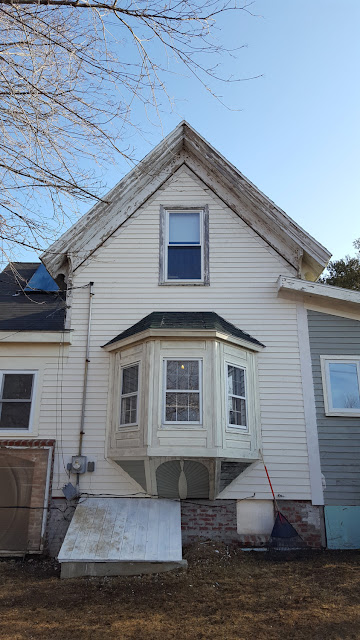 The last step was the sanding and priming of the old trim.  They got that all the way down to wood, which can be tricky with the angles and curves in the trim. 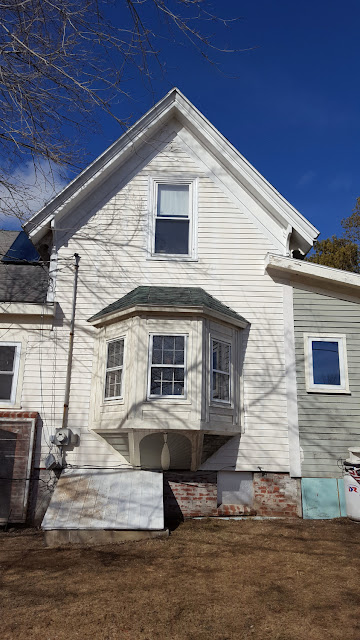 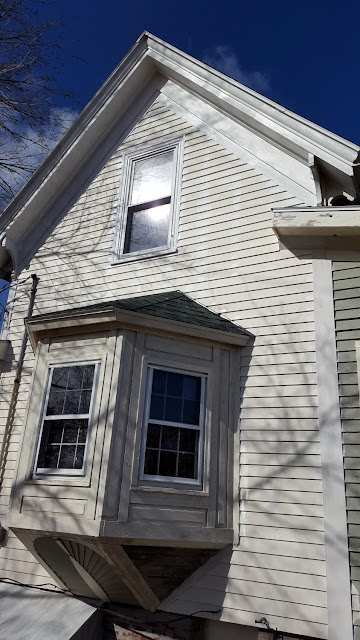 I'll be doing most of the painting this spring/summer, plus we have plenty of other painting to do if there's time.  I just so happy to have gotten this done so quickly and well.  Originally, Hubs had said he would do it.  He is very capable, but time management is not a skill he possesses, plus he kind of hates working on the house.  He's also very happy with the outcome, so a win-win!

I also finished a little knitting project for my favorite guy, but no pics yet in case his parents ever read this.  I got to spend some quality time with him last week, and will be spending time with him weekly going forward.  He's such a happy kid! 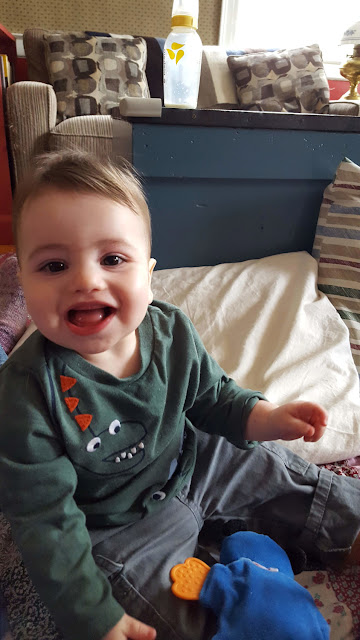