It Must Be Monday...

...because the day has gone just so well so far.

First up, my favorite activity (not!) - vacuuming!!  With two fuzzy cats and my lack of enthusiasm for this activity, the kitchen and den rugs can get quite awful before I pull out the vacuum, and today I had little choice but to buck up and get the job done.  I have an upright vacuum, which does very well on carpets but is fairly useless on bare floors, so after cleaning one room's carpet, I tend to get out the hose attachment and use it to suck up the stray kitty litter and dust bunnies.  I always have to empty the canister in between rooms, and when I went to do that, the canister's bottom opened all by itself and dumped a bunch of dirt and litter on the floor.  I had just put away the hose so I could vacuum the second rug, so I tried in vain to suck up the spilled dirt without resorting to using the hose and nozzle, but no joy.  I just love clean up the same dirt twice, don't you??

After that, my back was sore, so I went for a short walk outside, seeing as the temp was around 40 degrees.  That part of the day was glorious, despite the clouds.  It was really nice to get outside.

Then it was time to get to the loom.  I was sure I would be able to show you weaving progress pics by now, since the tie ups were done, sheds were checked and a single crossed thread was found and fixed.  I wove a small section of plain weave to spread the warp, then decided to do a small section of the pattern with contrasting thread to check the threading.  First, I found another crossed thread, so that was easy enough to repair.

This project being huck lace, the blankets will have a small section of plain weave on each side, with double diamonds in the middle.  Using treadles 1-4, all looked well.  Then, using treadle 5, the plain weave ends were no longer alternating.  Puzzled, I checked the draft's tie up and found that I had copied it incorrectly when I created it in my weaving program.  So under the loom I went, and changed the tie up for shaft #5.  Back at the front of the loom, I noticed that neither treadle 5 or 6 were creating plain weave.  I started thinking that maybe the book had some errata in the draft and turned on my computer, but then thought I really should look at the tie up again.

I crawled back inside the back of my loom again, and with a sinking heart realized that I had used the wrong lamms for shafts 5-8.  For the non-weavers out there, that means I tied up those shafts exactly the opposite of how they should have been.  I then spent the rest of my designated weaving time undoing and redoing the tie ups before lunch.  Oy.  The good news is, the sheds are still clean and actually look better than almost any sheds I've gotten on the this loom so far, so that's progress.

I'll have to leave you with some photos that I've taken over the last couple of weeks, showing the warp sleyed through the reed, 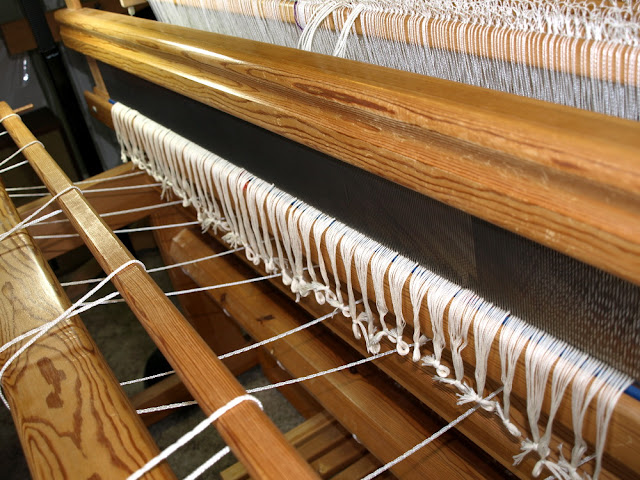 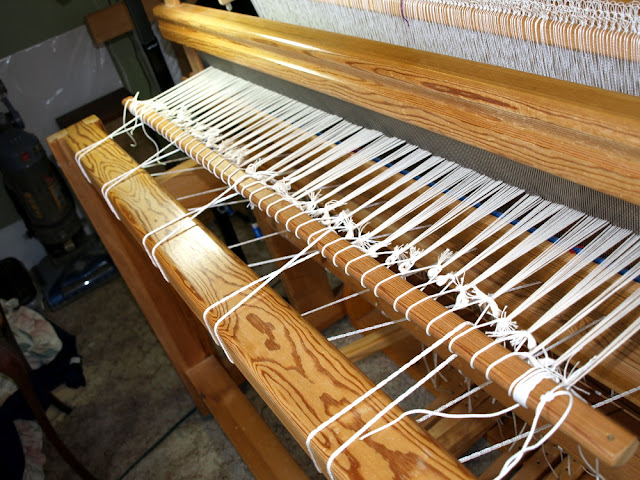 I'm a little nervous about weaving on a warp this wide, but time will tell...

This next photo I took when I began the tie up the first time, a week and a half ago.  It doesn't really give you the idea of how tight it is in that space, but it certainly shows what a confusing bunch of strings are back there.  They all have to end up correctly attached to the lamms (horizontal sticks) above the treadles, and through the correct holes in the treadles.  You might be able to see why my heart sank at the idea of getting back under there and having to redo a bunch. 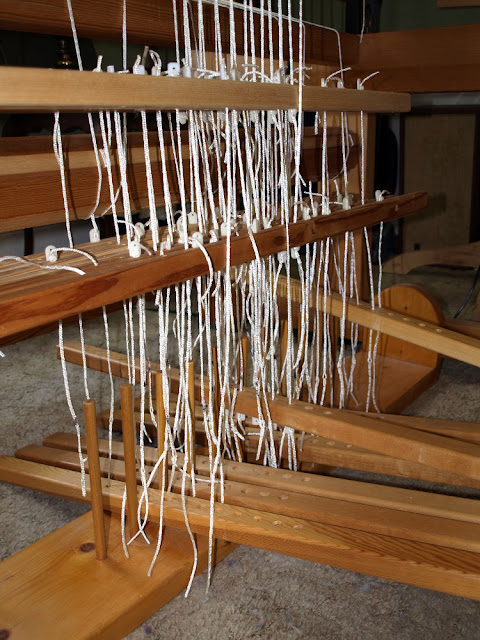 There has been an interesting discussion recently in the Warped Weavers group on Ravelry about the tie up on countermarche looms.  A weaver has very clearly presented another option that would allow all work to be done from the front and top, so I think I may purchase some more of this Texsolv string and rig the loom up that way after this project.  If it works for me, it would be wonderful, since I'm not getting any younger!