We are in the midst of a brutal blizzard that has been burying us with snow since 4 PM yesterday, so 9 hours. The winds are howling and the snow flying sideways.  It is supposed to last until 8 or 9 PM, with totals locally 18-24 inches are more.  I have to say, I am happy that I did not have to get to work this morning, though I am sure the roads will be a mess tomorrow as well.  The not-so-great news is that this is not the end of our unbelieveable week of snow.  We're supposed to get at least half of our yearly amount during this week alone!

Last Sunday, the ground was dry without a speck of snow.  We have had 5 storms since then, with another coming Wednesday into Thursday.

This photo was taken out my bedroom window yesterday morning, before the blizzard arrived, so the snow you see had fallen over the past 6 days, equaling ~15 inches. 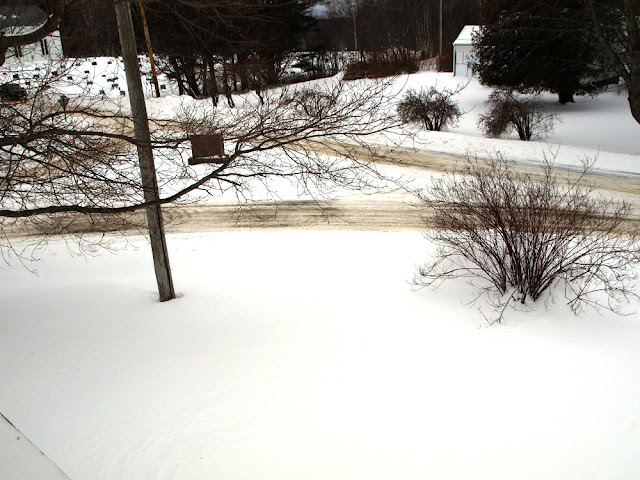 Here are some taken this morning, blizzard still roaring;

Inside our den.  These windows are 5 feet off the ground, and as of now, the snow is already higher than in these pics. 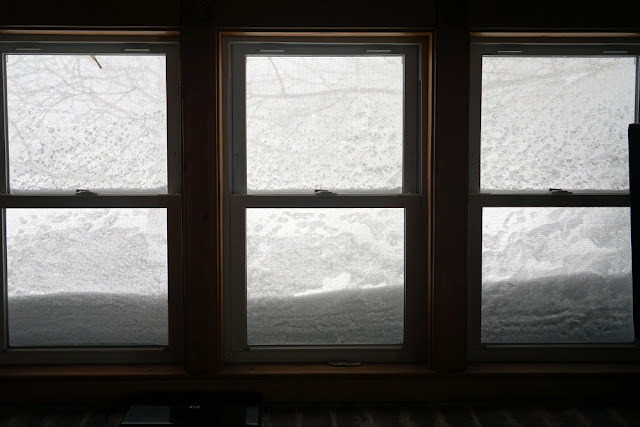 Looking through a larger den window at some suet we put out yesterday before the storm.  We have had several birds come for food, both here and at the adjacent seed feeder, to which they cling as it flies around. 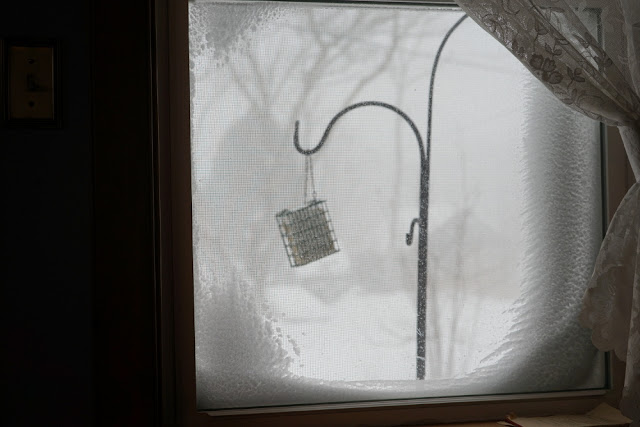 This one was taken through a door recently, right after a plow went by; 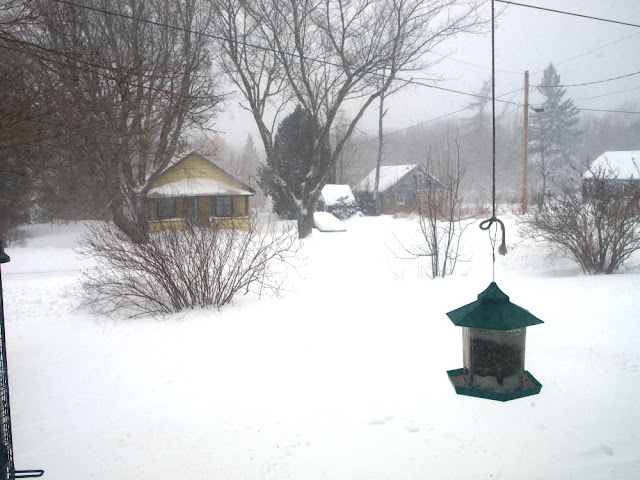 You can't really tell where our piles stop and across the street begins!

So what to do on days like this?  Well, I needed to wash some of my hand knit socks, and they helped brighten up an otherwise dreary day. 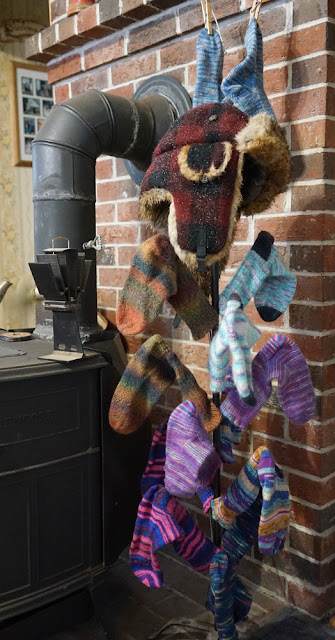 The hat is the one my hubby was using while he went out shoveling and picture-taking this morning.  Shoveling was useless, by the way - the snow has already filled back in and gotten higher.

In weaving news, I finished up my tencel scarf warp while home all week with a terrible cold.  At the last minute I decided to sew them into infinity scarves instead of keeping them straight.  I also had enough warp left for a bonus, smaller cowl.  I really liked that pattern, and can recite the treadling in my head, so I may wind a warp for another batch, if I can come up with a good color combo. 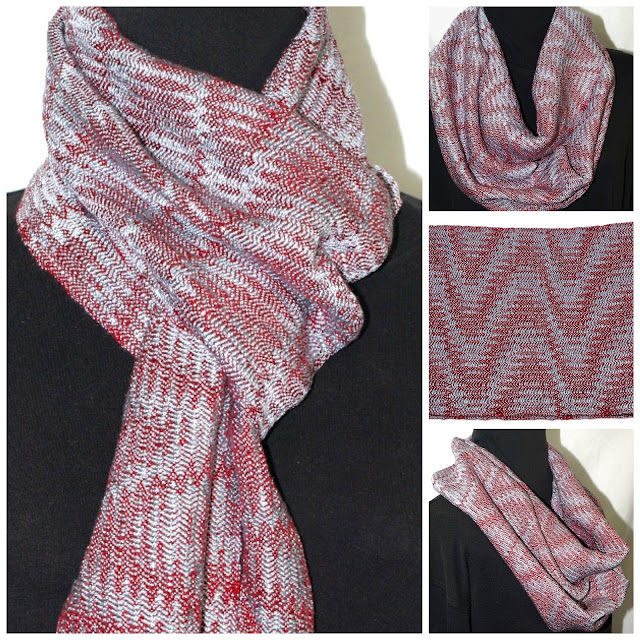 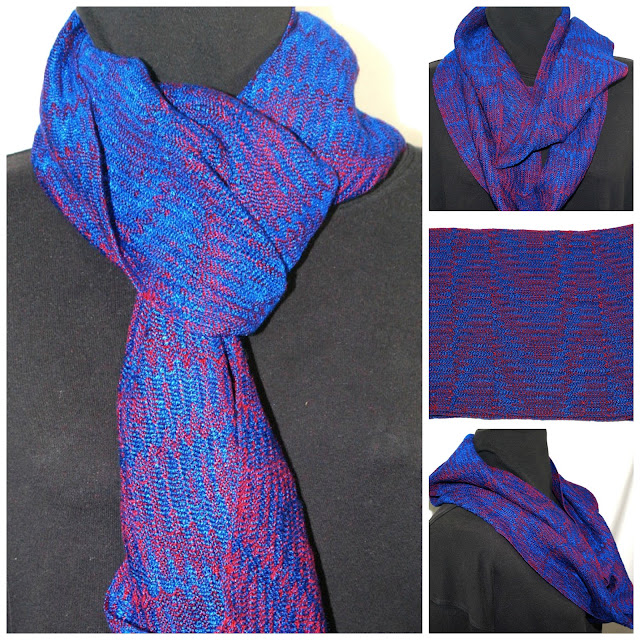 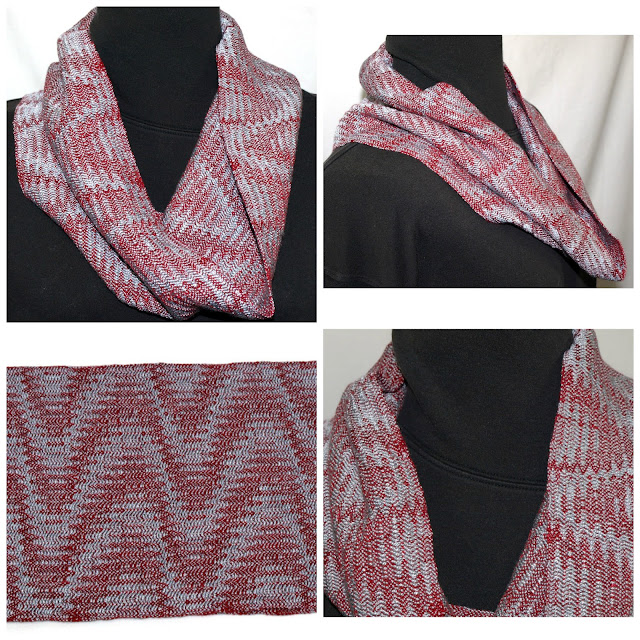 For the first time, I had one of my floating selvedges break twice, so I decided to try to weave without it, and it worked out nicely.  Good to know for the next time.

Surprisingly, when I closed up my loom after taking the scarves off, there was a large amount of tencel fuzz under and on the loom.  Personally, I've never had anywhere near this much after a scarf warp, so I wonder why this time? 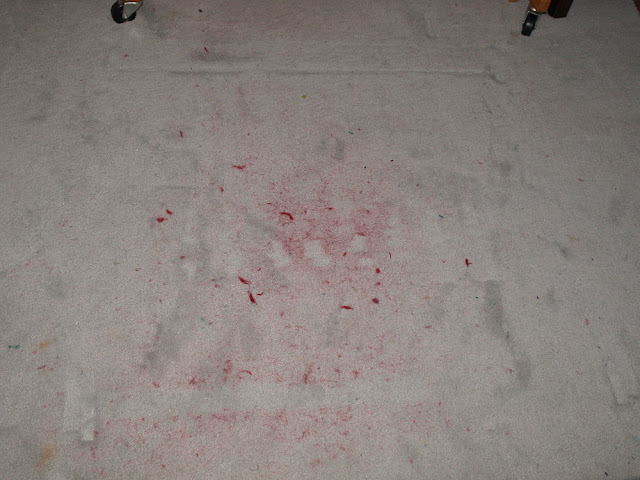 I never thought I would say this, but thank goodness for vacuum cleaners!