Since my last post I been making an effort to get to the loom, at least a little bit, every day I'm available here at home.  I'm also really trying to not feel pressured to reach a certain goal, or spend a certain amount of time weaving, but to weave until I just don't want to anymore.  I'm easily driven and competitive with myself, but that never leaves me feeling good about myself, so at least for now, I am trying to take my foot off the gas, just a bit.

Here is a photo of the finished tablet-woven band that was in progress last time: 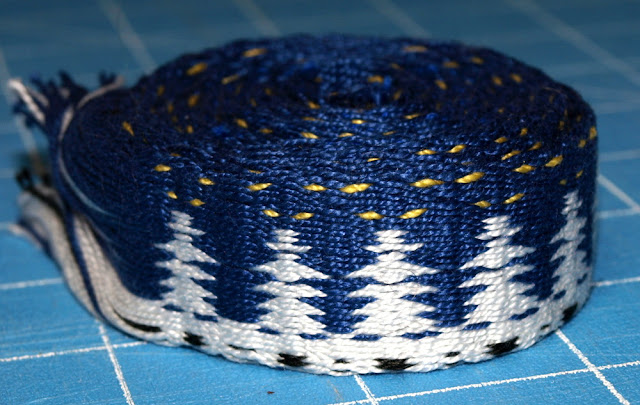 I really enjoyed weaving this, and plan to keep exploring this craft.

The double-faced band project that I cut off the loom last time is still languishing but in the queue.  If you remember, there were terrible tension problems, some of my own making, and some because of the tension peg's ability to be pulled off parallel with the other pegs.  My hubby, ever the tinkerer, listened to my frustrations and saw the problem, thought a bit, then took my inkle to his shop and came back with this modification: 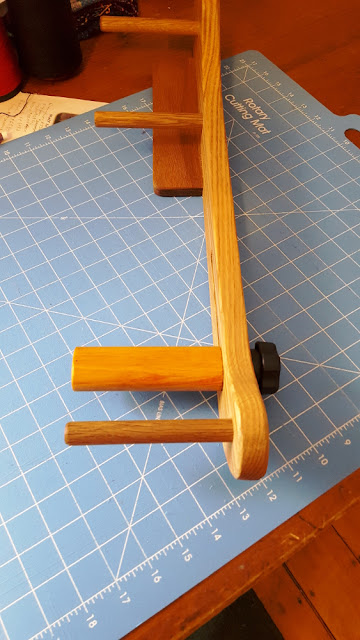 A tension peg that is larger and oblong instead of round, so it has better structural integrity.  He also replaced the wooden, circular knob with one that will be easier on my arthritic thumb.  You'd think that I would have jumped at the chance to try this right away, especially because the resultant key fob was supposed to be for my son's birthday, but I had already started some tencel scarves and wanted to continue to weave those on the Baby Wolf.  He won't mind a late gift.

The scarf draft came from a Weavezine article by Bonnie Inouye, and the treadling sequence is definitely giving my brain it's exercise every time I sit down! 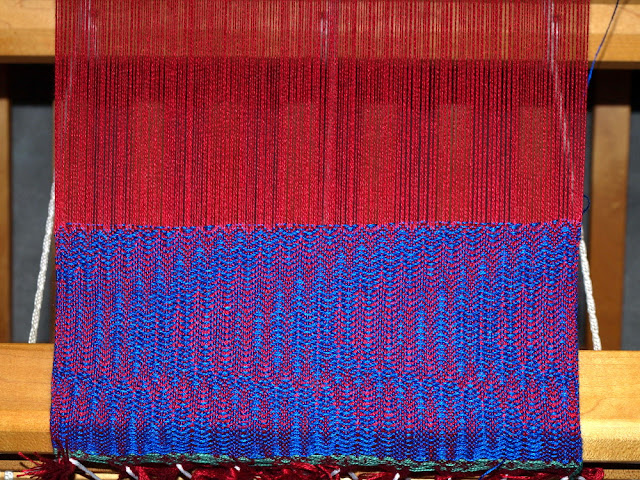 Eight shafts, progressing twill, I think.  I warped enough for two scarves, but I think I want to use a different weft for the second one.  I'm thinking silver, but would love some input!