I realized I haven't posted in awhile, but, well, life has been even busier than usual.  At first, there were added responsibilities at work, as we are prepping for a medical records software changeover in January.  I am among many SME's, or subject matter experts, who are folks who have a fairly good grasp of using electronic medical records already in the day to day care of hospital patients.  We were to receive training in the new system early on, so that we can practice to become more comfortable with the changes and then be a resource for everyone else as they learn and after the switch.  These classes were 4 hours long, and we had 2-3 of them a week, along with our regular shifts.  This past week was the end of them except for one, which happens after Thanksgiving, and is basically how to teach people the skills necessary to document in the new system.

As soon as those classes were done, my husband got sick.  I got home from my regular shift on Thursday night and he was on the couch, complaining of being cold and feeling lousy.  He didn't have a fever, but definitely had other signs of the flu - body aches, malaise, no appetite, a terrible headache.  I encouraged him to hydrate and watch the temp, but had to work the next day, so I got up before him and headed out the next morning.

When I got home he wasn't any better, but he wasn't any worse, either.  Still thinking it was the flu, we went through the weekend without too much change, until Sunday, when he seemed a bit better. He had a bit of an appetite, and was up and around.  That all changed on Monday, when I took his temp again and it was 103+.  We ended up in the emergency department for hours, where the doctor was sure it was a tick-borne illness, only to discover it was a very bad pneumonia.  He was so dehydrated that his lung sounds were not junky at all, but the x-ray was impressive, I heard.

Long story short, he was admitted and spend the next 7 days and 6 nights as an inpatient, getting heavy duty antibiotics, nebulizer treatments, and other supportive care.  He showed signs of improvement after a couple of days, and just came home this noon time.  What a relief!  He will be on oral meds for a few days, and have to check in with his PCP soon, but should be able to start slowly building back his strength and stamina.

In weaving news, I forgot to take photos of the baby wrap woven with the dyed peppermint weft, but here are a couple of shots of it that the customer took after she received it. 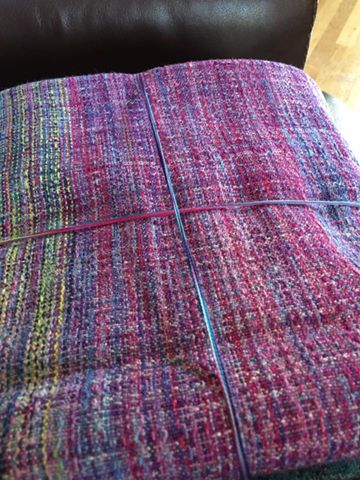 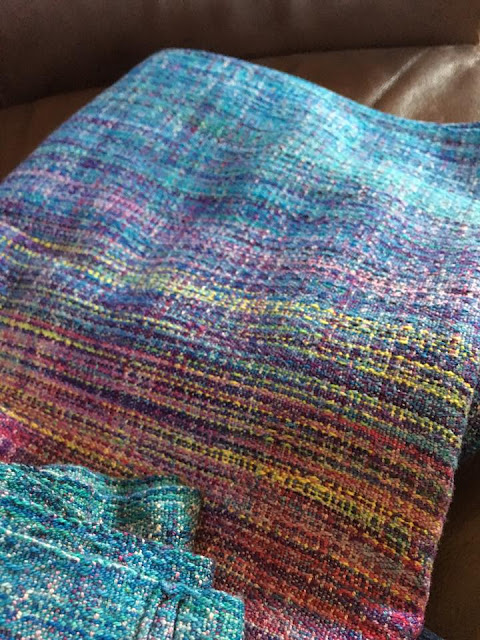 The third piece, woven with indigo Zephyr (wool/silk), ended up being 2.81 meters long (unhemmed) by 29.25 inches wide.  I've offered it up as is, hemmed, or converted to a ring sling.  It has still not been claimed, and so it sits, awaiting its forever (or not!) home. 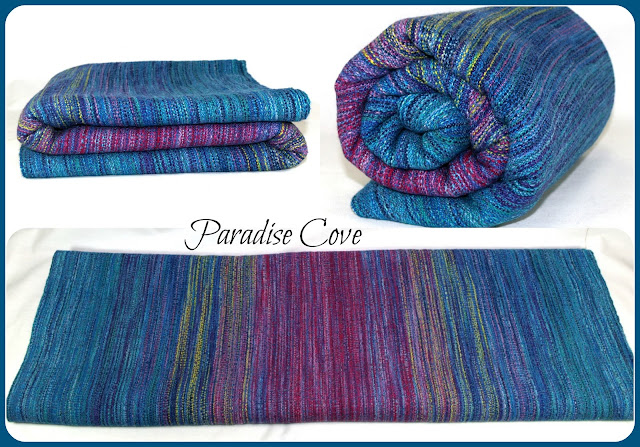 As for other weaving, that may or may not happen for awhile.  After all of the extra responsibilities and running around, I feel the need to take it easy for awhile.  I may change my mind, since the weaving bug usually doesn't take too long to strike.

Oh, and I'm knitting my first BSJ, or Baby Surprise Jacket!  For those of you who don't know. it is a baby sweater that is designed in a most bizarre fashion, but gets folded and sewn into an adorable little sweater.  Here's a photo taken yesterday.  I am just at the point where I start increasing.  More photos to come.

I hope everyone has a wonderful, drama-free Thanksgiving with family and friends!