As much as I love taking part in the weavers' competitions on Facebook, the prolonged secrecy makes it way to easy to drop off the map and stop blogging.  After all, if all of your crafting is being done in secret, what is there to talk about??  I'm afraid the rest of my life is pretty darned boring, so not much help there.

The good news is, I just finished the weaving portion on this competition baby wrap!  The length came out as I had calculated - always a good thing!  I've taken a few photos along the way to share later, but now comes the true tedium:  the thread by thread checks for mistakes, then the wet finishing, and lastly, the photography work.  I really wish I had a baby to wear, since it can be a challenge to get photos that really grab the viewer's attention when all of the photos are taken on a flat surface.  And even though I work with new moms all the time, I do not feel I can ask anyone to model for me.  I don't even know if I would be capable of taking the kinds of photos I've seen others do if I had a live model.  So it may again be a collage of folded and/or rolled cloth that gets submitted by the deadline of March 23rd for the final voting on March 31st.

I've also been working, gasp, overtime!  We've had a bit of a baby boom lately, with some complications requiring longer stays, plus I'm one of several nurses starting the collaborative work to change our hospital over to another medical records software system.  We are part of a much larger medical system, and most of the hospitals in this system have already been converted to Epic, which is the software that the "mother ship" uses.  We were supposed to make the conversion earlier, but several problems cropped up at the largest hospital, so all was put on hold until those issues got resolved.  We are now just starting again, and there have been a few meetings over the last couple of weeks to go to.  This week I also have to do my NRP recertification (Neonatal Resuscitation Program), which will be an additional 4 hours on Wednesday.

So in the very small category of shareable fiber news, I can show you a photo of my sock that I'm knitting from the yarn that I spun and dyed awhile ago.  You remember the yarn, yes?  Mohair/wool/nylon that I spun on my spindle and dyed with Wilton food dyes. 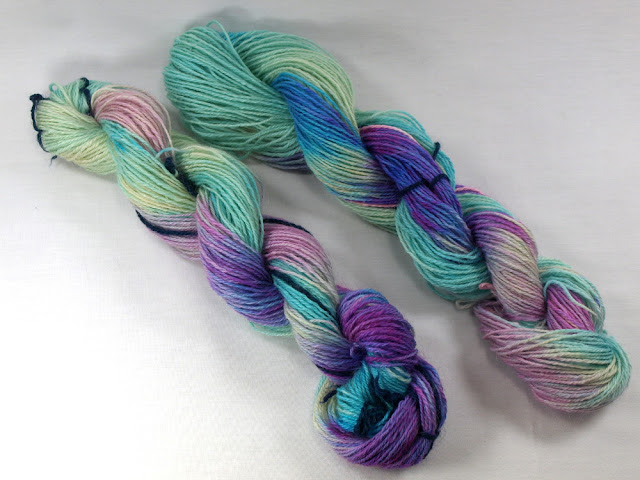 I decided to knit the toes and heels with millspun, since I've had issues before with handspun not being durable enough in those areas.  So here's a shot of a sock, at the point where I start increasing for the gusset. 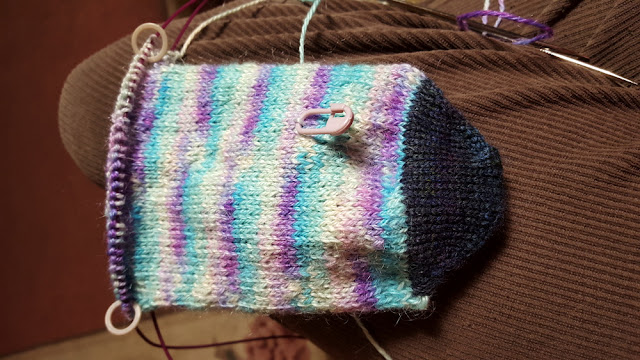 I bit over exposed, but you can see how the pastel sections outnumber the more saturated colors.  As I'm knitting, I've been wishing I had just used all purples of different intensities, since I like those sections the best!

Up next on the loom with be a 12 yard warp of 10/2 mercerized cotton for a set of turned twill towels. One of the consignment shops has been very interested in getting some to sell, so I promised I would have six for them by May.  The other six will go to my shop, or into the bin for the summer craft fair.