Yes, it's true.  I'm a liar.  I don't know how I have become such a disrespectful, loathsome creature, but alas, I have.  I'll blog more often!  Next post will be more colorful!!!  Blah blah blah.  Don't believe a word I say (or write).  So, no promises.  I will strive to be better, to write more often, to fill your screens with vibrant photos of all kinds of yarny goodness.  But, y'know, I wouldn't hold my breath...

In the last post I wrote about my spinning, and I have just finished spinning the third ply of the second skein, so the sixth ply in all.  It is sitting on my spindle, waiting to be wound off with the other two plies to form my plying ball.  When I do this I have to make sure I have more time than it would appear I would need, because inevitably one ply runs out way before another, so I have to use the Andean plying trick (https://www.youtube.com/watch?v=M5VlaR3t_7M).  I've been pretty busy between working extra shifts (lots of sick babies!!), practicing, rehearsing, and playing a Christmas concert (with one more coming up this Saturday!), and a bit of furniture purging/rearranging, so I've put this final spinning bit off, but I'm hoping this evening I can get it done.  If not, it will have to wait until next week, what with work, rehearsal, the concert, and a sojourn to Portland to see the symphony play their Christmas concert, which is always wonderful.

I've also been a bit distracted thinking about dyeing this sock yarn I'm spinning.  I've only dyed once, using Kool-aid and some store bought yarn.  I liked the final product well enough, 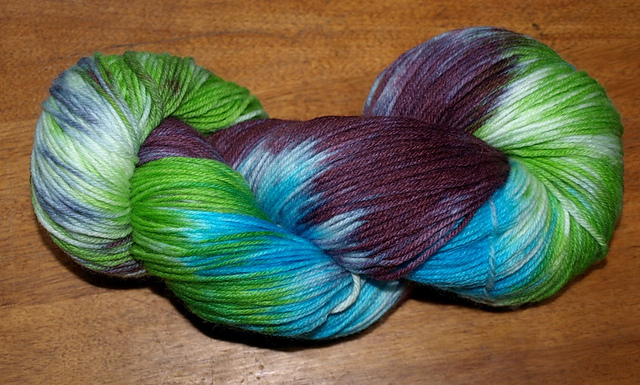 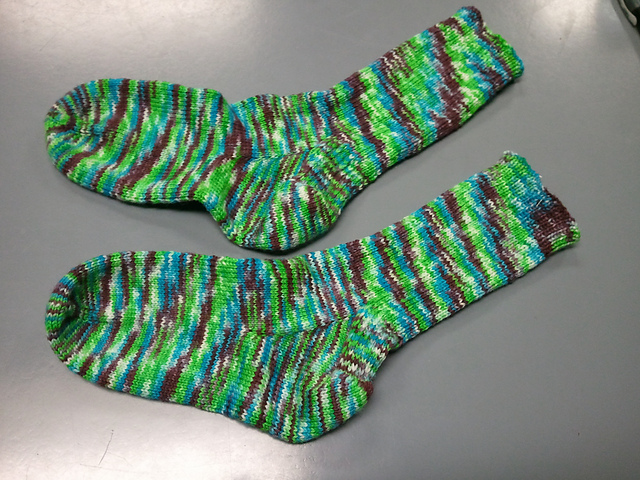 but they really smelled like that sicky-sweet drink mixture for months.  Ew.  I have a book on dyeing, and have been perusing the web (ahem - time suck), but haven't come up with a plan yet for this soon to be born yarn. More research (read surfing the web) is needed.

I don't know if you remember, but last year was the first Christmas that I had the big loom in the living room, and there was no room for a tree.  Of any size.  So I strung a few lights on the loom and called it good.  The real tree lived on the porch. 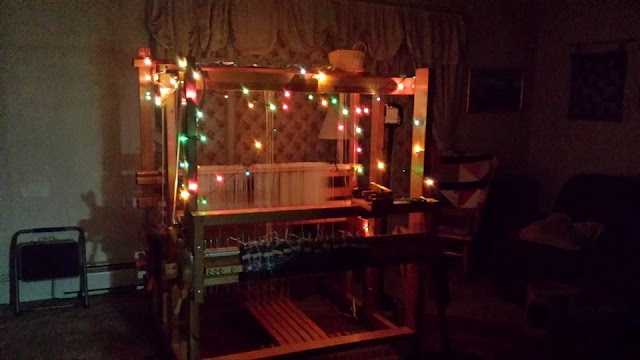 You don't really get a sense of how the living room was laid out, but I had already removed a coffee table that lived in front of the sofa you can glimpse on the far right.  We had the loom jammed as close to the wall as we could, which meant I couldn't bend over and pick up an errant shuttle if one flew by my hand without getting off of the bench and contorting my body in ways that cannot be described. After we moved the loom out just a bit, another problem was created.  Trying to wind warp onto the sectional was an exercise in flexibility, because there was a stuffed chair just off the back beam.  So, Square mini mounted on the beam, yarn cone holder on the floor at an angle, tray table open to hold notes, and I was again twisting and bending in order to move around.

This room used to be the room that we used to watch TV in the evening.  We had our flat screen (an "enormous" (at the time) 40") in there, and this recliner sofa, along with a rocking chair and the stuffed chair.  Over time, it just felt really silly to sit in the family room off the kitchen to watch the evening news, or read, or socialize, and then troupe into the living room, especially after the kids were grown. The wood stove is in the kitchen, so the family room is more comfortable than the living room, which is situated in the northwest corner of the house.  So we moved the TV into the family room, and the living room became the room for weaving and queueing up the stereo.

After warping this warp from you know where, with all the issues I had with tension, I was fed up with the contortionist act.  Actually, I was fed up with just about everything, loom included.  But calmer heads prevailed, and I offered the couch up to anyone willing to take it.  I posted a few photos on Facebook but got little notice, until I contacted a former coworker who knows EVERYBODY. 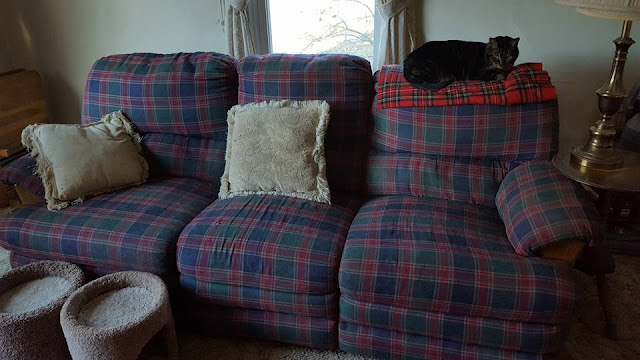 It was spoken for within ten minutes, and gone the next morning!!  And, yes, we kept the cat!

Now it was time to move the loom to that end of the room.  Um, the loom that weighs a bunch. Hmmm, how was this going to work?  I know it comes apart easily, but with that yarn on there I was not going to try that.  So off the the hardware store we went, where we purchased some of those teflon-like sliders.  I didn't believe they would work on our old, gross carpet, but boy was I wrong! The loom easily moved to its new home.  (Photo taken from the stairs). 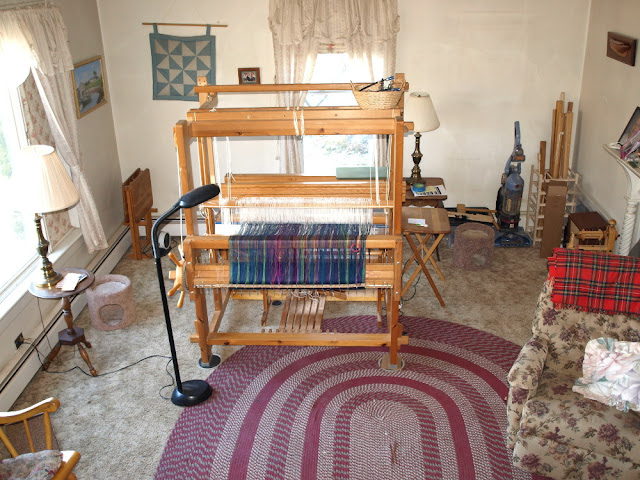 So much space around it!!  I don't do well with clutter, so this can only lead to good things.  I have plans to paint the living room one of these days, but we all know how that goes.

The warp you can see is the next batch of baby wraps.  I'll show better photos after I tie on this afternoon, but despite the many problems I had to deal with, I do love these colors together.

So, as a final shot of colorful woven goodness, here is a photo that was posted on my Facebook group showing the competition ring sling piece that I wove this fall.  This wonderful mama has generously shared these and other photos, and says that it is their favorite wrap piece.  It is even used as a blankie when her child is in the car. Things like this bring such joy to my heart! 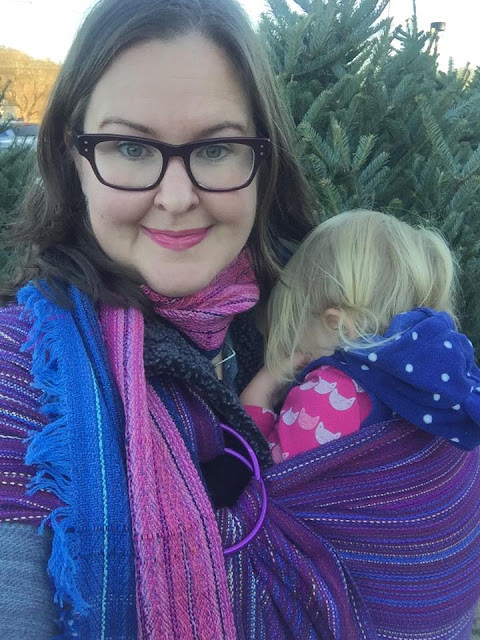 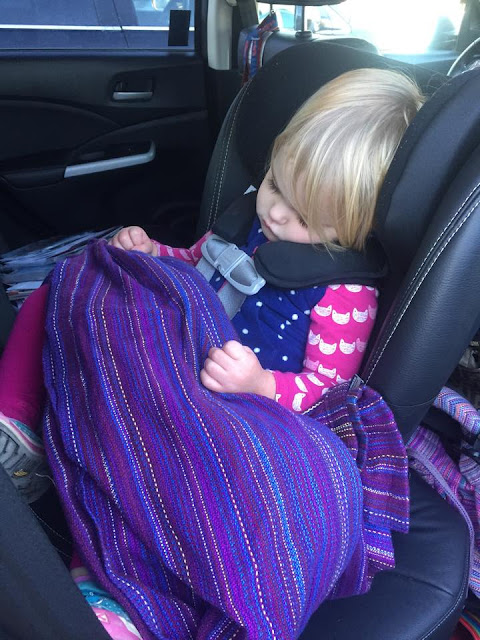 "Til next time, whenever that may be!