Where has the time gone??  I can't believe it is already mid-October, although the tempurature is reminding me nicely.  I've been busy trying to get the first project on the Glimakra, as well as plan and begin some tencel shawls for the Etsy shop.  All of this precedes the co-op ad in the November issue of the Downeast magazine that I took part in.  I'm hoping it will drive more people to my Etsy shop.  If it does, it would be good to have it stocked up, right?

For the Glimakra, I chose a simple straight twill for a quick set of 4 cotton towels.  At first I was leaning towards Christmas colors for obvious reasons, but I just couldn't get excited about them, so instead I went with two of my favorite colors - purple and aqua, separated by 4 picks of black. 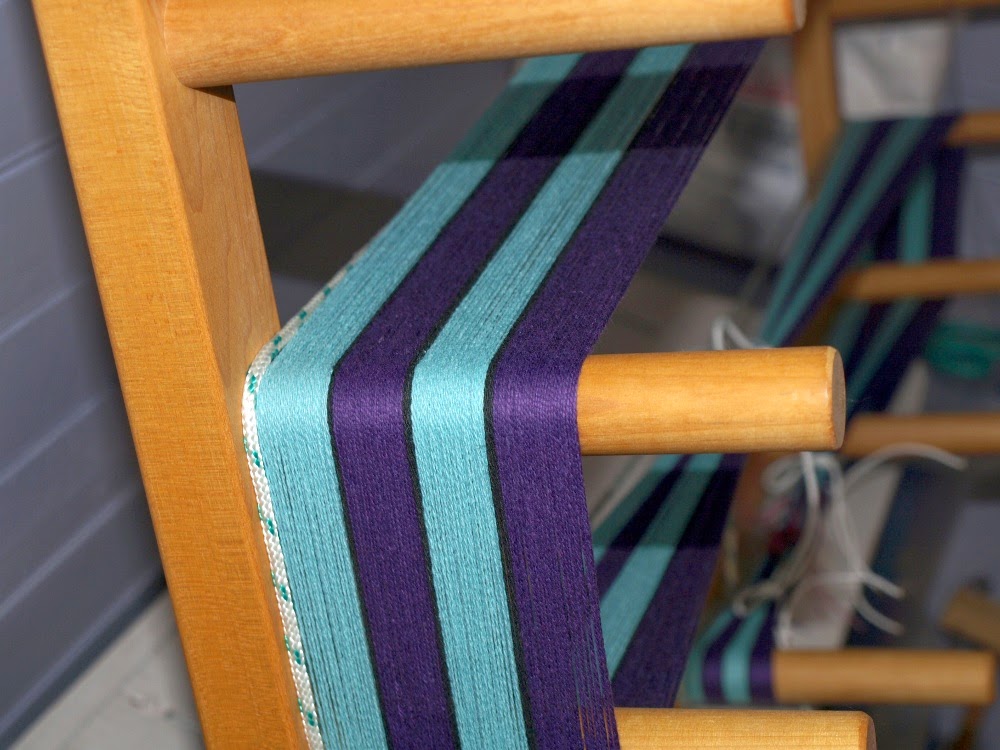 I don't know what it is about purple, but several women of my (ahem) age group say that they love purple as well.  Perhaps there is something to be said about menopause being adolescence in reverse, since I LOVED purple in junior high!

I decided to beam the warp non-sectionally, figuring it would be faster than having to set up all the ties necessary for sectional warping.  I did find that I don't need a trapeze arrangement to do it with this loom - the frame works great! 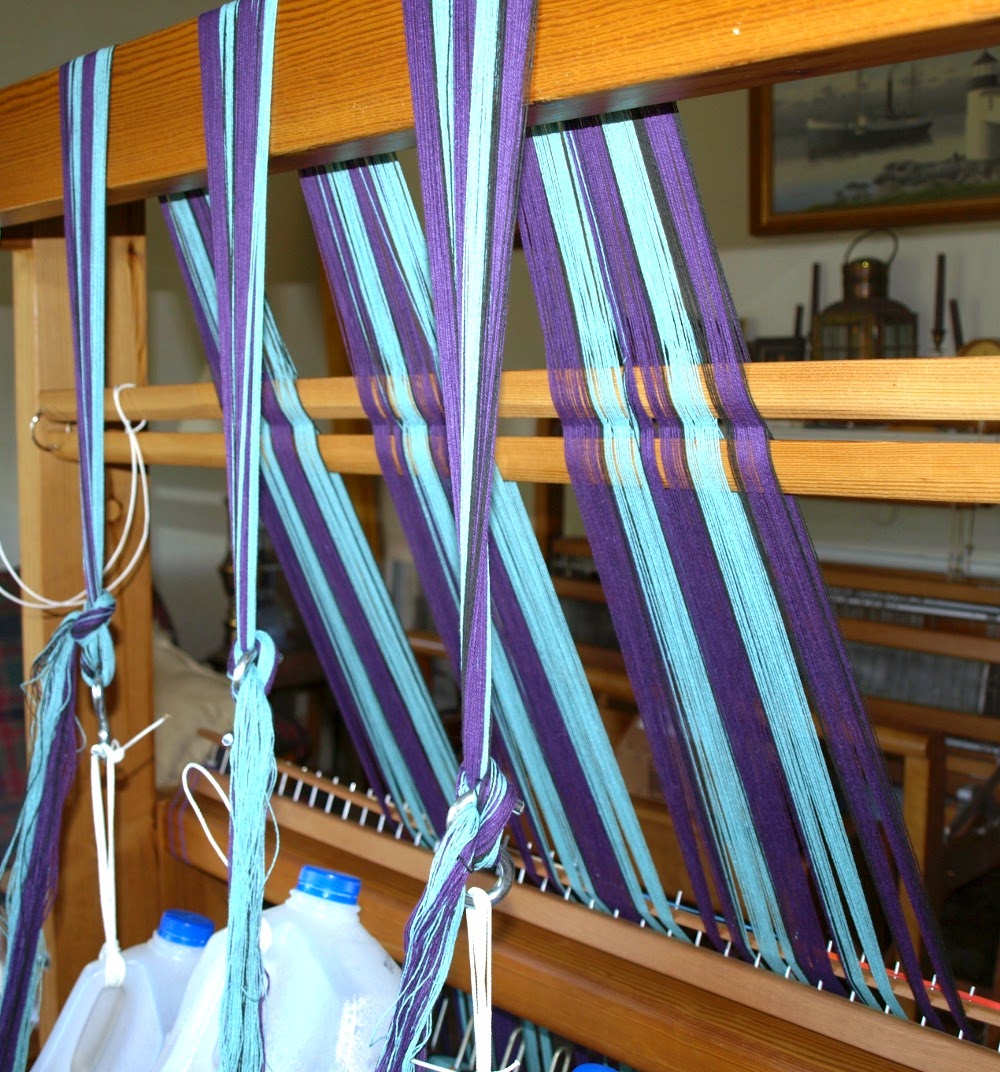 I had my usual tangling issues, but worked through them.  I wish I could figure out where I am making all these mistakes. Another shot... 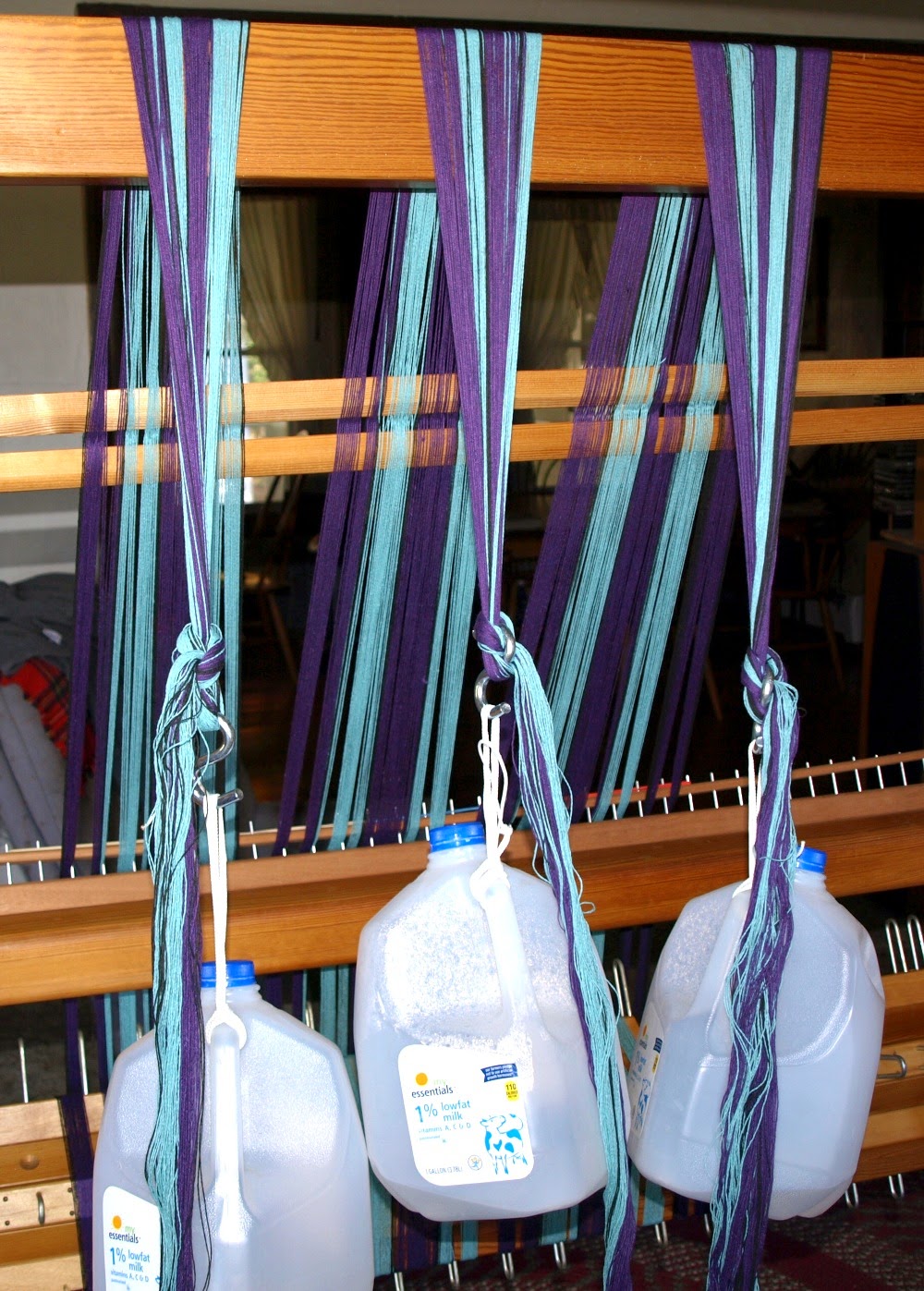 My next adventure was threading the heddles.  This loom came with string heddles, and I wonder if they are all the same size, or whether some have stretched, because the bottom heddle bar is not hanging in such a way that all of the heddles are taut.  I'm sure this will lead to a shed that could use some improvement.  I removed the breast beam to thread, knowing that the bench fits inside the loom. However, with both legs of the bench inside, I can't sit straight because the cloth beam is only inches away.  I compromised by having one leg of the bench inside and one outside.  It worked, but was not the best.

Last night I started sleying, and really ran into a road block.  On my other looms, I've always been able to sit on the bench and sley with the reed in the beater, but this beater is HUGE. I can't see over it, and can barely reach the heddles.  So I sleyed standing up for awhile - not fun.  Then I put the bench seat very high and did some sitting - again, not fun.  Finally I smartened up and asked for help on Ravelry, and as always, folks jumped in to help.  Apparently, the best way to thread the heddles with this loom is to move the shafts towards the warp beam, so the bench fits inside comfortably.  And several people recommended placing the reed horizontally, either on sticks or suspended with string, and sleying by having the hook underneath, reaching up for the ends.  It was awkward at first, but it definitely worked better.  I managed to get the whole warp sleyed before bed. 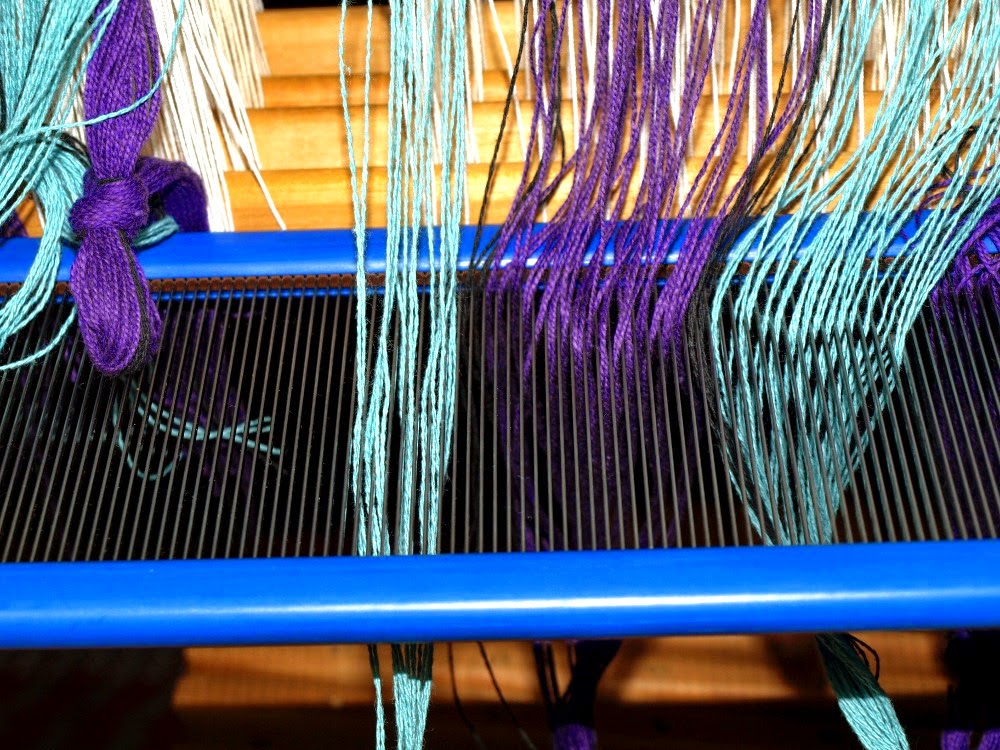 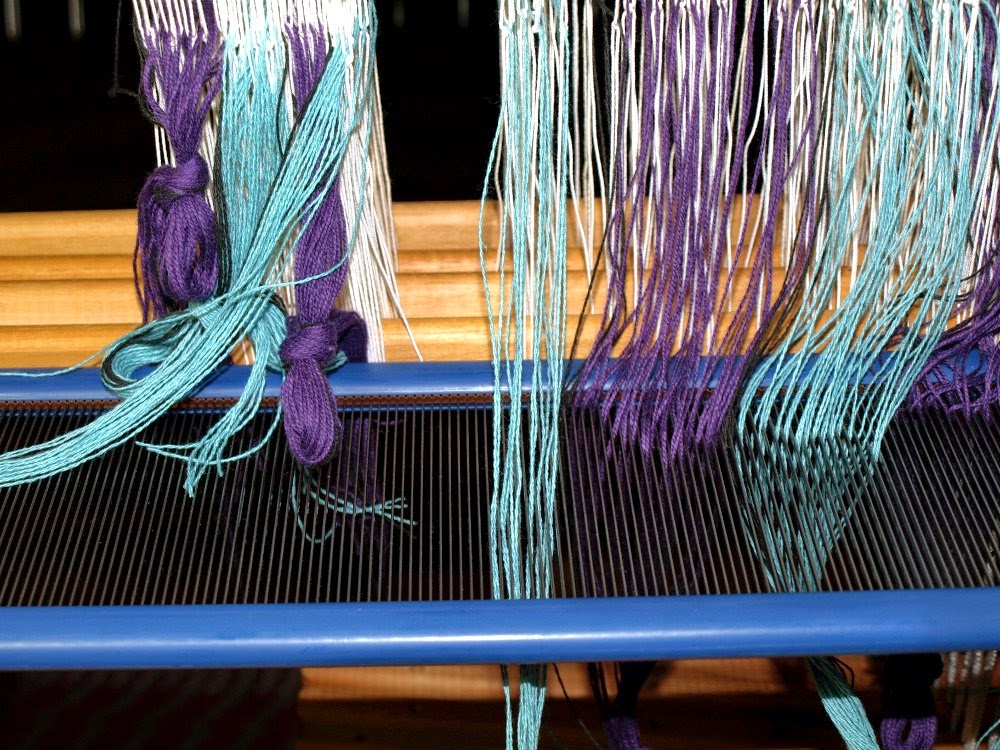 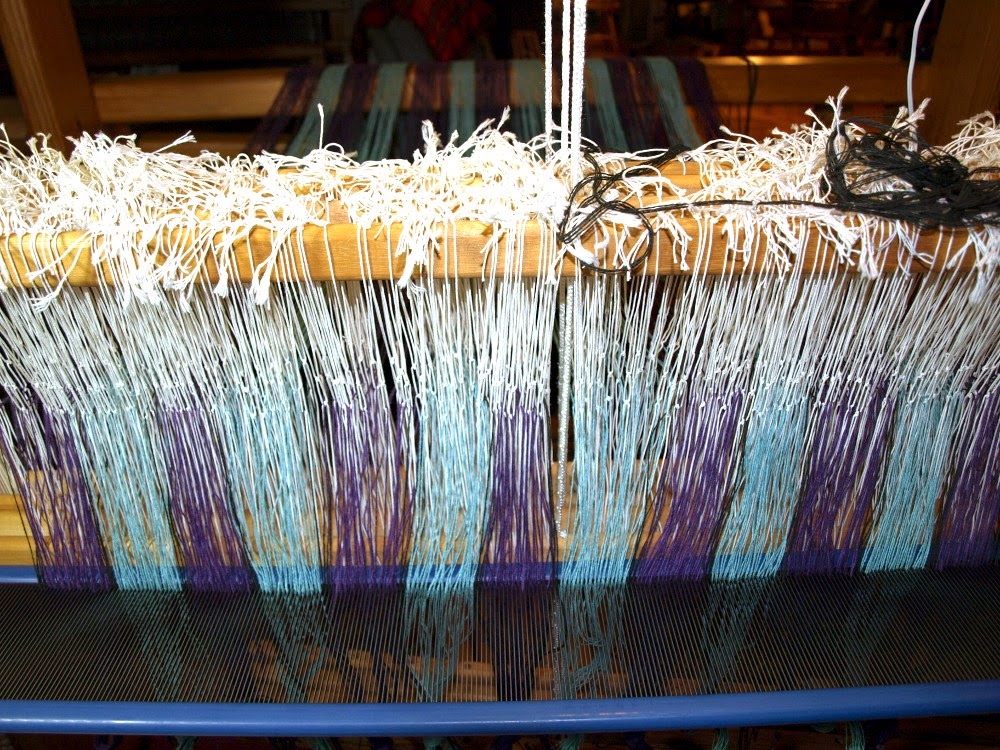 Here is how I suspended the reed; 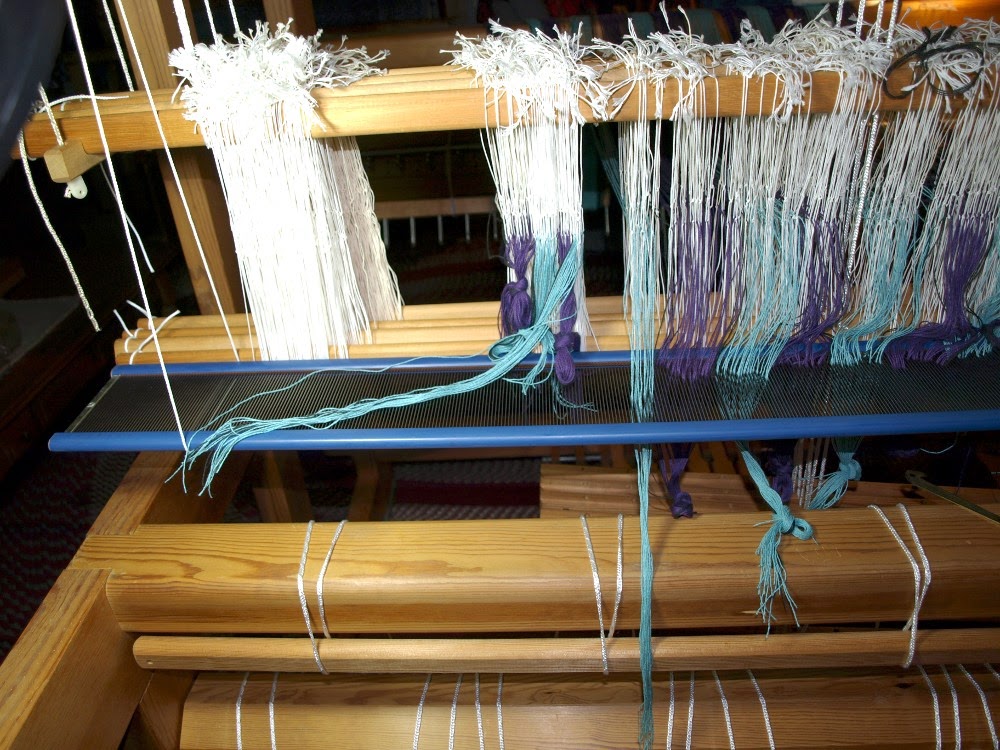 Today I will be lashing on, and hopefully spreading the warp.

I also spent a bit of time this morning winding another tencel warp for Snowflake shawls.  I tell you, after fighting with cotton lately, there is nothing nicer than winding tencel.  It just flows through your fingers!  I got all 398 ends wound in no time. 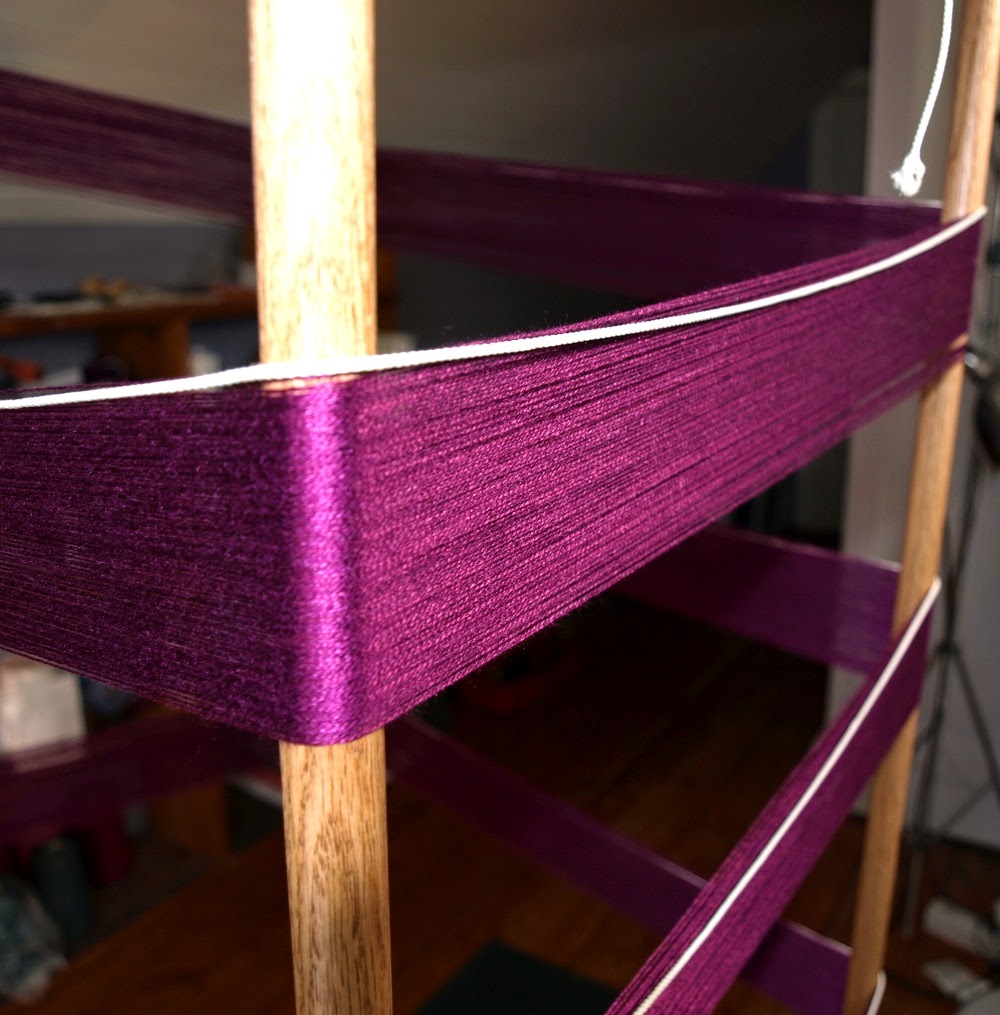 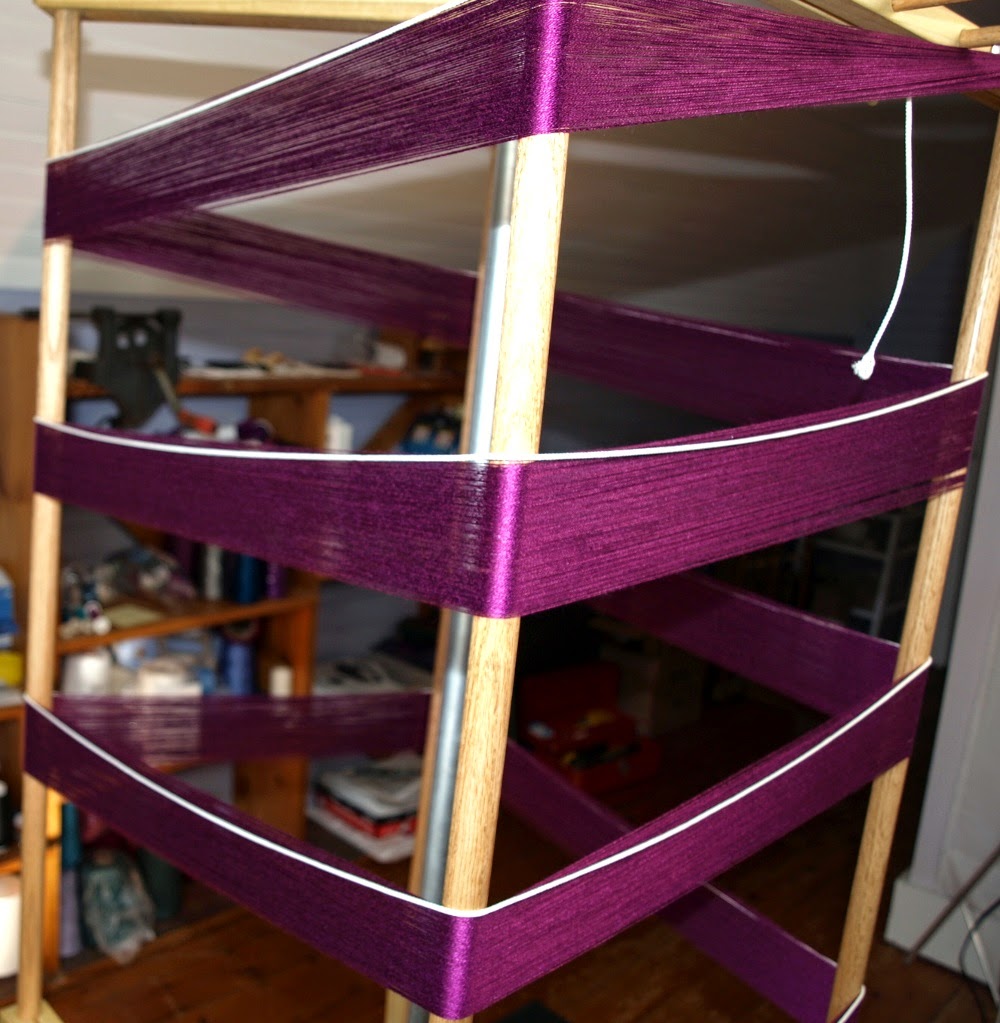 The warp is red-purple, and the weft will be eggplant. Purple again, anyone??

I've also been in contact with 2 folks online who want me to weave them custom baby wraps!  There are still a lot of logistics to work out, and the weaving won't happen for some time, but I'm excited to dive back into design work.  I just have to figure out my big loom before then, and maybe buy some texsolv heddles to make sure I get a good shed.