My mojo, that is!

I was asked to weave a table runner and 6-8 placemats for a wedding in October, and between work responsibilities and a short trip soon, I felt a bit of a time crunch sneaking its way into my head.  At first I couldn't even decide what weave structure to use, which, of course, led to more panic.  I kept thinking that overshot would work, but since I have yet to actually weave overshot, it seemed like a bad (read slow) idea, not to mention having to weave with 2 shuttles, thus slowing everything down even more. Still, it seemed like the only idea I could come up with, until.... I remembered the wonderful snowflake/crystal draft that I've woven several times in the past.  Except for a bit of math, it was all written down from other projects, so that saved some time.  I decided to go with 10/2 cotton for this iteration, and I think I've made a wise choice.

The draft is an eight shaft pattern, so I dressed my little BW with bleached cotton, planning for an approximately 60" finished piece.  I also decided to do a bit of "fancy" work on the hems, so I wove several inches in white, hemstitched, added a spacer, then started with the weft with some more hemstitching.  Susan Harvey, otherwise known as weeverwoman (http://weeverwoman.blogspot.com/) has an in depth tutorial on some of the ways to increase the wow factor by hemstitching such as this. I've admired her weaving forever, but this was the first time I decided to use the technique myself. 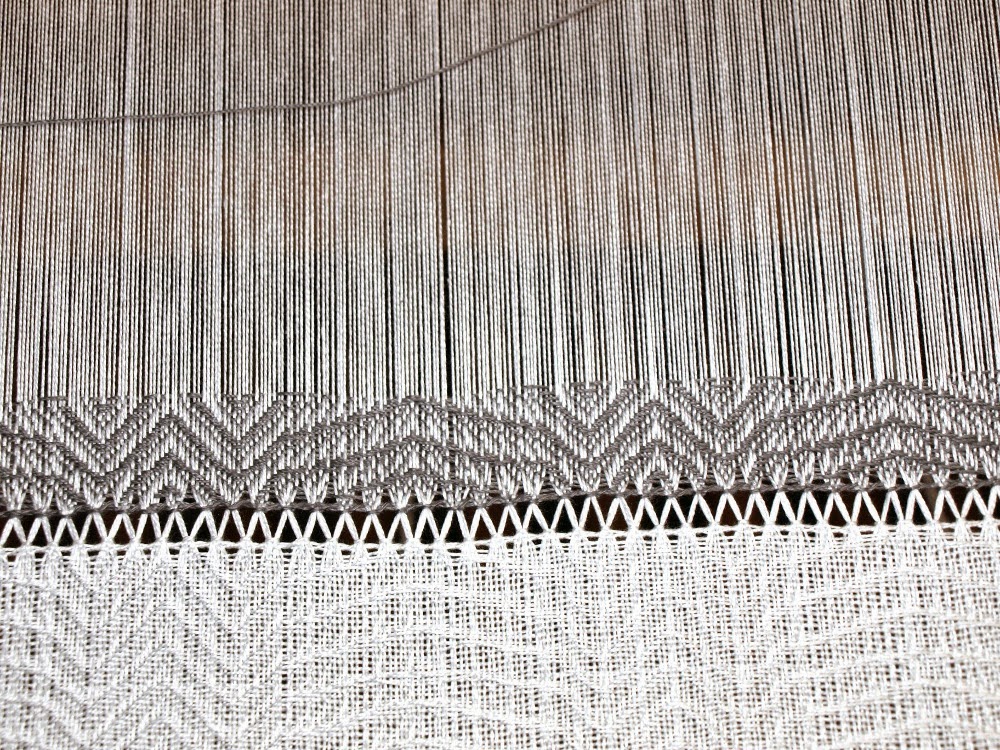 For weft I chose a medium silvery gray, as the happy couple has a black table, and white and silver plates.  When looking at the weft cones that I ordered, I thought it might be a bit too dark, but the next lighter color would have had little contrast with the bleached warp.

Today is a very rainy day here on the coast of Maine, so after breakfast and bit of exercise, I headed up to the loom room, and managed to get most of the body of the runner finished!  I did have a bit of a senior moment at one point and unwove 32 rows because I was sure I had made a mistake.  After weaving another ~30 rows or so, I recognized that, no, the first was correct, so unweave again did I! That wasted quite a bit of time, but the rest went well.  I'm now at the point of doing some repeats that will lead to the hemstitching at the other end.  I just love this pattern, don't you? 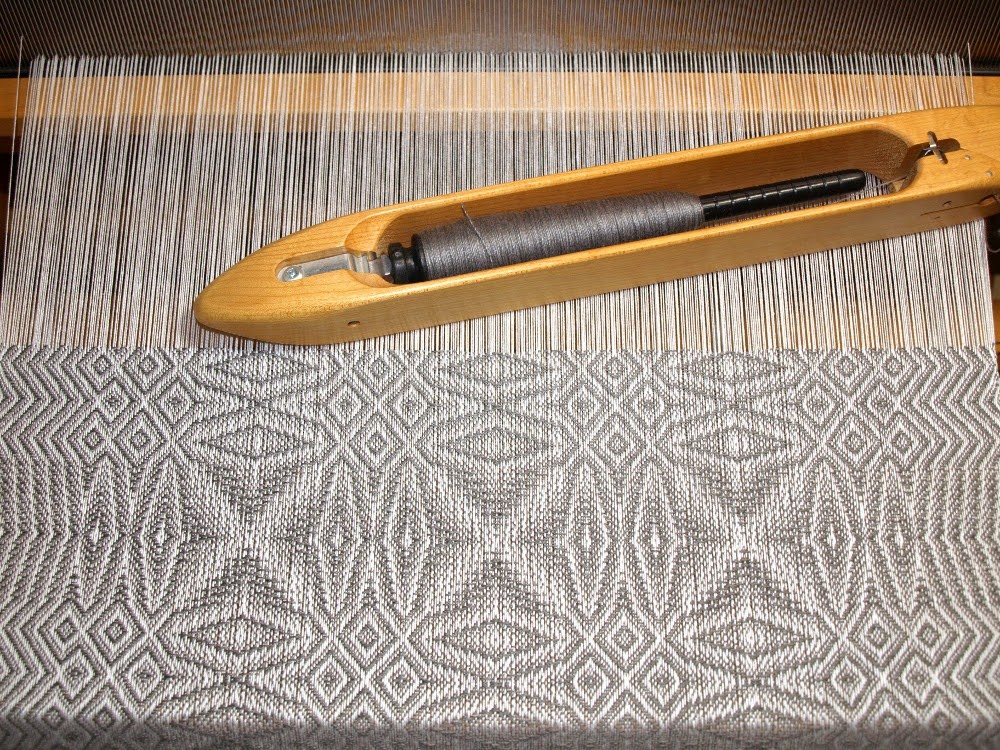 There is a 4 shaft version of this made available by Laura Fry on Ravelry, called Canadian Snowflake.  I will use that for the placemats, because it is easier to put a long warp on the Fanny, which only has 4 shafts.  Yes, I do need to do some more math, once I figure out what the finished width of a placemat should be.  Any suggestions out there?

Another conundrum perkolating in my noggin is the possibility of obtaining another loom.  The ONLY reason I am even considering it is that it is the same width as the Fanny (45"), but has 8 shafts and is a countermarche (convertible to a jack?!?).  Theoretically, I could sell both of my other looms if this is a good fit.  I know I'd love a CM loom, and the width is perfect.  It was made by Leclerc, and is a Colonial, which is mostly pegged together, so it will be easy to get it in the loom room.  It is no longer made, which makes me a bit suspicious, though.  Does any weaver out there know anything about this loom?  The seller is being very helpful, and will be sending more photos.  She says it just needs some texsolv and a couple of small hardware bits to be usable.  Temptation, temptation!