something to blog about!  Believe it or not, I have been weaving, mostly to increase my very limited inventory, so as spring arrives and visitors start coming to the little shops I consign in, I will have something to give them.  Not too much, so far; just a few towels, plus the iridescent scarves from awhile ago, and my snowflake table runner.

The towels were easy enough to weave, with a straight twill treadling.  For some reason, the first towel ended up with 2 errors, which I didn't pick up until I was almost done weaving that particular towel because the pattern on the "wrong" side (i.e. the side facing me) is fairly indecipherable.  The error came from a shaft that stayed up when it should have come down.  I find that this seems to happen quite often with my little loom, and I'm not sure why.  I have thought that it might be because my loom is not level, either because my house is crooked (which it is - it's old) or because when I either wind on the warp or when I tighten it after advancing it, it tightens crooked.  The loom seems level, at least with my little bubble level on my phone.  Either way, once I knew it had happened, I was careful to be more mindful that each shaft "returned to base" after each pick.  I did catch it twice more, so only "lost" the one towel - that's one new towel for me!

Here are a couple of in-progress shots: 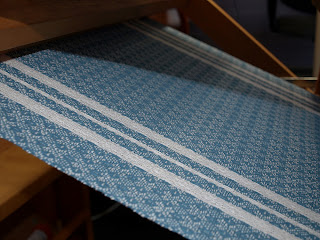 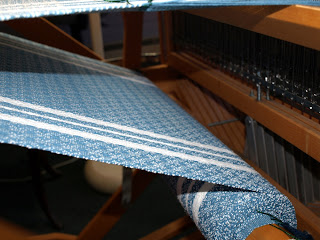 And the final photos: 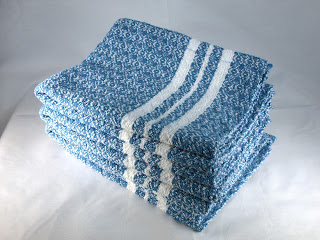 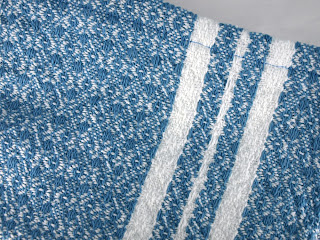 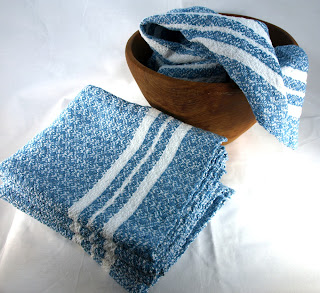 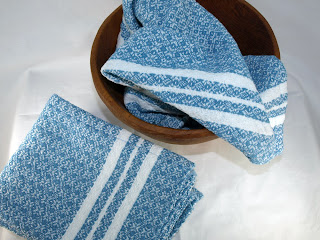 This is the modified 8 shaft star draft from Webs ( http://www.yarn.com/webs-weaving-spinning-weaving-drafts-kits/valley-yarns-weaving-draft-64-modified-star-work-dishtowel-on-8-shafts/).

Life has been quite stressful lately, because my 90 year old father in law has entered the final stage of his life.  He's gone from living in a nearby assisted living facility, being fairly independent, to spending a week in a far away hospital for multiple issues, to being shipped to a skilled nursing facility for rehab, only to find out his one kidney has basically stopped functioning.  My husband, who has spent every day with him since this started, is now hosting his brother for a few days, so he can connect with his dad, and help him through some of the necessary decisions.  There will also need to be some major decisions/work done on the family home, which has been vacant for a year.  It's a beautiful, very old place on deep water frontage, but so far no one is interested because of the age of the house.  It needs to sell soon, to help finance his care.

We will also be adding to our family because of the recent changes. My father in law's cat has been taken care of at his apartment since this all began, but they just called today and said that unless we start paying a rather large sum, they will stop taking care of him starting April 1.  So later today, when "the boys" come back from the nursing home, we will be welcoming this cat, who right now is known as "Kitty," (as have all of my husband's family's many cats!). 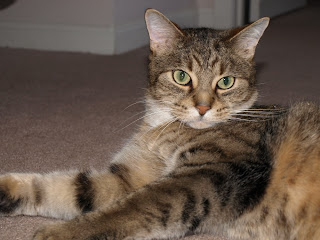 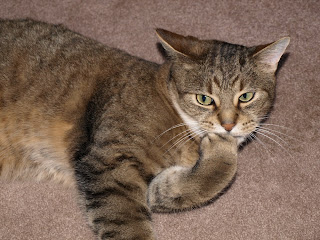 He is very shy, but hopefully will feel at home soon. As for the one cat we have, Whirl; 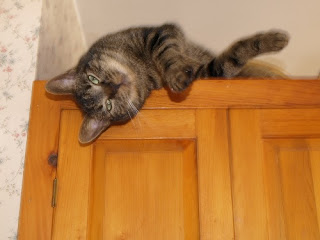 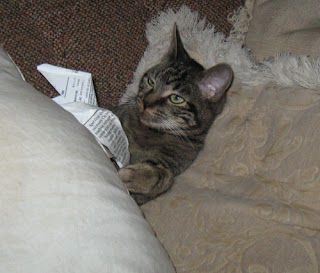 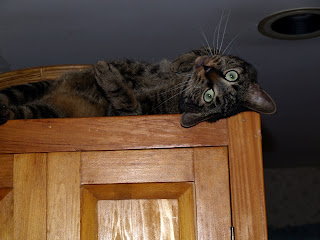 He's a great cat, and we used to have multiple cats, but I find I am loving having just one.  Hopefully they'll learn to get along well, and the new kitty will let me get my sleep with my weird schedule.