Just a short note this time.  I've been under quite a time constraint, trying to weave up a few different items for my first jury experience on March 3, which, gulp, is coming right up.  I cannot possibly convey how anxious that second sentence makes me feel!

I haven't been having as much weaving time as I had hoped, because various life issues keep popping up.  Nothing too earth-shattering, but enough to eat up huge swaths of time.  We're hunkering down for our 3 major winter storm in 2 weeks, so the clean up has been anything but fun.  Dear hubby came down with influenza at the end of the first storm, a true blizzard, so he was really down and out for over a week.  Feeling much better now, though he still has a cough.

Work went from zero moms and babies to 14 couplets in about 3 days, and stayed that busy for over a week.  Every time we were going to discharge someone, we already had another one or two mommies-to-be in labor.  We ran out of cribs, and many other things along the way.  Alot or work, (but fun!) - but I did end up working some extra night shifts to help out.  That, in turn, did nothing to sharpen the ol' brain, I can tell you.

I started physical therapy a week ago for some new, sharp lower back pain, so that was twice weekly trips to town.  I really think the treatment plan looks promising, well, until I broke a rib there this Wednesday.  No sudden movements, just working on extending my back while getting traction on my lower vertebrae and a helping arm under my trunk, when the PT and I felt a 'clunk' in my lower right rib cage.  It's only gotten worse from there.  I went to the ED for confirmation, so now the long, slow, painful recovery begins.  I've had a broken rib before, and it was no fun, but now I'm older so it will be even less so.  It's really hard to lie down, but my back (and butt!) won't tolerate sleeping sitting up for very long.  I guess I'll just have to get whatever snippets of sleep I can.  AND continue to work nights.  Can you tell I'm a bit discouraged??  Will have to schedule a bone density test, obviously, although I think it's pretty clear my bones are made of swiss cheese.

So, as for the textile selection to show the jury, all I have is a table runner 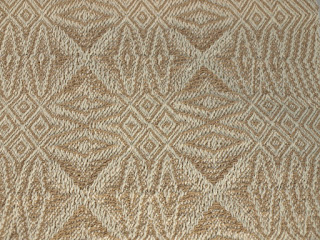 a bunch of colorful towels 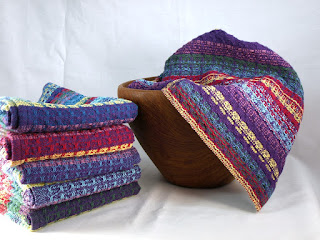 and an iridecent scarf (which is still on the loom but only needs hemstitching, fringe twisting, and wet finishing). 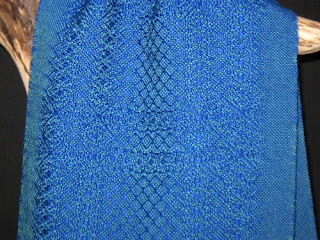 I actually dressed the loom for two of these, but because of my time issues, I'm going to cut the first one off, retie the second one and weave that one later.  I'm thinking I may also bring some samples of cloth that I've saved over the years to show what I CAN weave; i.e. my purple shawl material, a variety of cotton towel cloth. And my wonderful son offered to loan me his (new) wife's tencel wedding shawl to show them, JUST to show another finished product.  Isn't that nice??? Hope his wonderful wife agrees!

I am just a bit weary, what with all the storms, health issues, extra work...  I'm really looking forward to spring, but around here that could still be a few months away. Sigh.