After my last rant, I thought I'd update the project from you-know-where.  I finally began weaving this morning, and started with some very short samples.  I had tan, silver, and white in mind for the weft, but only enough warp for two, so I tried all three - and ended up undoing 4 shots of white because it just wasn't right. 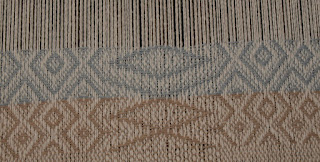 I know the silver looks more like blue here, but it really is a nice shade of gray.

I felt some relief after sampling, seeing that the project would turn out alright, despite all the issues I had getting to that point.  I decided to begin with the tan, and happily wove for a bit, enjoying the relatively simple treadling sequence.  Until... 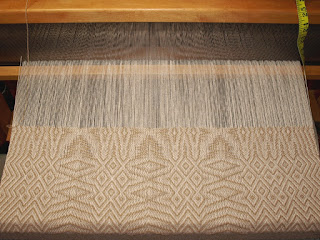 I realized that the I did indeed mess up the threading, despite checking it several times over!  Notice the asymmetry there???  This runner was planned for the jury process in March (I've pretty much given up on the gallery opportunity), but with the design so off-kilter, that doesn't seem like such a great idea.

I guess I have to just go with the flow, realizing that this project was doomed from the start.  Except for the asymmetry, I really do like this pattern, so continue on I shall!