Lessons Learned, and a Lovely Gift

A bit of weaving has been happening in the last few weeks, but more on that later. 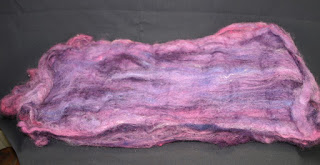 There are two batts of wool, dyed in some lovely shades of purples and pinks.  No idea what kind of wool it is, but it will be a pleasure to discover its properties.  I've never spun from a batt before, so the whole process will be a learning opportunity. The funny thing is, the person that bought them had no idea what they were (she doesn't knit or spin), but she just liked the way they looked.  I agree!

On to the weaving update.  You'll recall that I was last in the process of threading the silver 10/2 bamboo for two scarves.  It's been awhile since I last blogged, and in all that time, this is what I've accomplished: 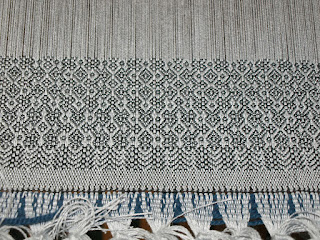 Yep, that's it.  A grand total of 5 inches.  It took me no less than four attempts to get the threading correct.  And I still found 3 threading errors after I'd tied on and spread the warp, so even now it is only correct because I moved some threads, added 2 more, and threw 2 off the warp beam, where they will pool on the floor as I weave.  And it's not that the threading pattern was particularly difficult.  I wasn't distracted by anything, alone up in my new "studio" space - no phone, no TV, no interruptions of any kind.  So what is the excuse for being so inept at what should have been a fairly simple part of the project?  I have none.  And this leads me to the "lessons learned" portion of the blog.

Surely I am supposed to learn something from this degrading of my weaving skills. Patience, for sure. Humility?  Fallibility?  Acceptance of myself when I am less than what I think I should be (one of the definitions of fallibility, I think)?  That the important thing truly is "location, location, location? - i.e. I may still not be comfortable in my new space.  All of these come to mind.  I also am trying to accept that it is perfectly OK to NOT be driven to churn out woven things one right after the other. This is a hobby, and as such it should be enjoyable.  If other things grab my attention, and I'm not on a deadline, than perhaps I should "go with the flow" and get back to weaving later.  Feeling guilty does no one any good - ask me how I know! So the other gift that I have received is from myself, and it is the gift of time.  The weaving will come along in it's own time, and when I'm done with it I will love it for what it is, not for what it might have been or for how quickly or easily it was woven.

One other thing kept me away from the loom for the last few weeks.  Do you remember this sweater? 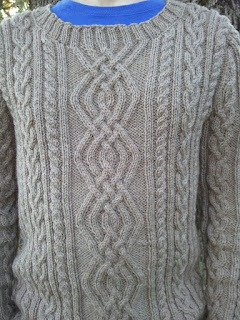 I knit it for my younger son, and got it done in time for the fall.  It fit like a dream, and he loved it.  As the house cooled, he wore it often...  Until he shrunk it in the washing machine in November.  I was away at a holiday craft fair, and he called as we were leaving, asking how to stretch it out, because it had been washed AND dried with all his other laundry.  Grrr.  Nothing to be done.  And I certainly wasn't about to go through that process again, cabling every other row...

While I did mean it at the time, it occurred to me around 6 weeks ago that reknitting the sweater for him as a Christmas gift would be a wonderful surprise, because he would never expect it.  So I ordered the yarn, and started on the sleeves, truly believing that I'd knit on it a bit at a time, getting it done in time for the holidays.  But, as it seems my personality dictates, I started working on it like crazy, and started seeing some real progress.  It became more "done" than not, and I started thinking that he would probably want to have use of it before winter, so I started forcing myself to knit even when I didn't really want to.  After knitting the body in the round up to the break for the armholes, I could see the finish line and sped on.  I saved stitches on cording, first the armhole stitches, than the completed back stitches. Knitting the front started to feel like I was wrestling an octopus!  It was no longer fun, but his birthday is next week, and I'd come too far to not give it as a gift then, so on I went.  I managed to get it compeleted by this past Wednesday, weaving in all the ends, and writing up explicit washing instructions.  All was gifted yesterday, since he was up for the weekend.  I think he was pleased, but I doubt more than I was to be done with the thing.  And I swear, I am never knitting that sweater again!  (I know, I know - never say never).

That's all for now. Who knows what kind of progress I'll write about next time.  Thanks for visiting!