No, not that kind - the FUN kind!  Yes, that's right, I've picked up yet another fiber hobby.  Actually, I'm not sure it will become a habit, only because I seem to have run out of hours in the day, but I decided to try dyeing some yarn.  I knew that I'd have to buy new equipment to use regular acid dyes, so for this little experiment I used sugar free Kool-aid.

Here you can see I've assembled everything I needed: I covered the counter with a large plastic bag, and I have four packets each of purple (grape), blue (berry blue, I think), and green (lemon-lime).  I also have measuring cups to hold the dye, a bowl to soak the yarn, the yarn itself (which is an undyed wool/nylon blend meant as a sock yarn), gloves, and a towel. 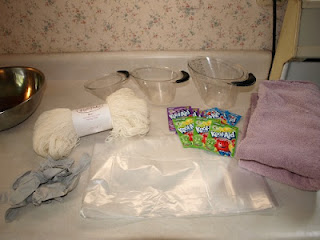 I soaked the yarn in some warm water 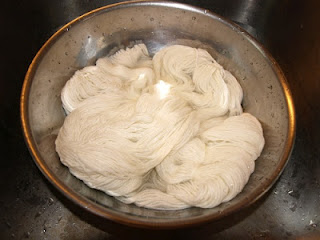 and mixed 4 packets of each color in about a cup of water.  I could have used more water, but one of my measuring cups would only hold that much.  I have to say, the sickly sweet smell was pretty strong! 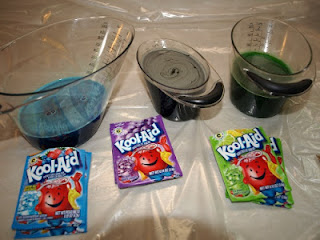 I carefully wrung out the excess water from the yarn and laid it out on the plastic.  I then gently poured the dyes on the desired areas, working the dye into the yarn with my gloved hands.  (I also could have used squirt bottles or foam brushes here). 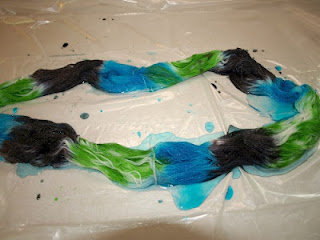 And a close up:

Here I've rolled the wet, dyed yarn  up in the plastic and tied the top with some cotton yarn; 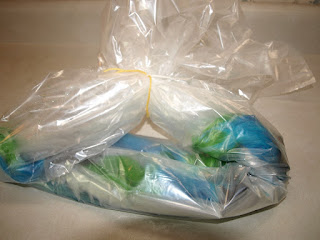 Into the microwave it went!  This is a steaming method of setting the dye. Dyeing could also be set via a crockpot, in the oven, or on the stovetop.  I microwaved on high for 2 minutes, let it sit for 2 minutes, then repeated that two times more until the water was clear (you can just make this out in the bottom of the bag in this photo). 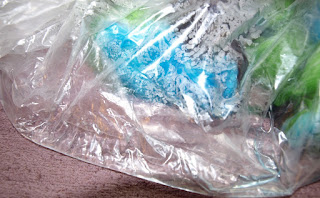 This is the yarn freshly "cooked" yarn, after coming to room temperature; 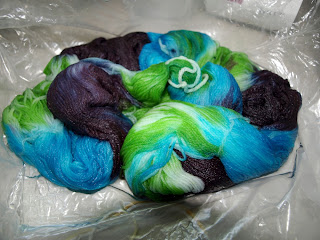 I gently rinsed it in some room temperature water 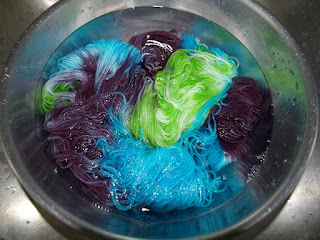 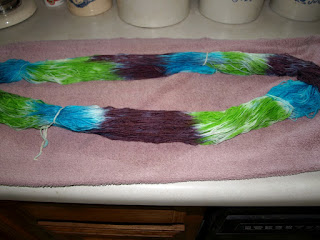 I then hung it outside to start to dry - I was very pleased with how it came out.  It almost has a tie-dye effect. 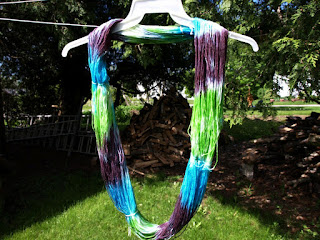 And the finished skein - ta da!! 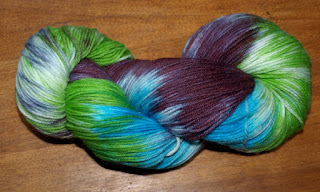 Won't that make a fun pair of socks?  Or even a colorful shawl.

I know I promised some weaving in my next post, so this is all I have managed.  The loom was moved up to a spare bedroom, where all is still in disarray.  Boy, that was a work out!  The walls are pretty dark still, and there are some lighting issues to be worked out.  I'm so used to weaving right off the kitchen in a multi-windowed room - this feels very out of the way, and a bit depressing.  So all I've managed to do is wind the warp onto the warp beam and start threading the heddles.  It's 10/2 bamboo in a nice silvery grey, and there is enough for 2 scarves on there.  Here you can see the generally messy set up of the loom partially folded for the threading portion; 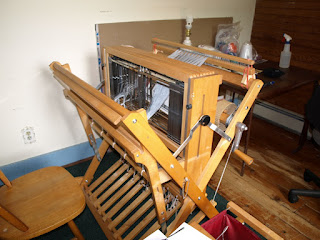 (You can see the temporary folding card table in the corner behind the loom).

And here are the first few heddles already threaded and the warp as it comes through the raddle. 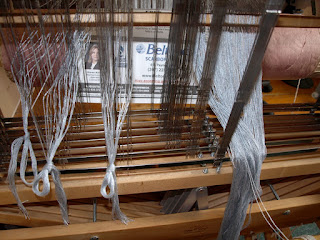 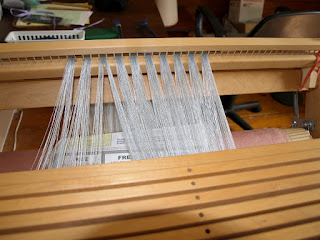 Sorry for the photo-heavy post!  I just thought I'd put the general procedures out there for dyeing yarn with kool-aid.  You could also use food dyes, or Wilton's cake/icing dyes, I hear.  The process would work with any animal fiber, and would make a great kid-friendly project for a rainy day.