Now that the wedding runner and placemats are complete, I've started and completed a lace shawl for me to wear at the wedding, should the weather not cooperate.  This is my first knitted shawl, though not my first lace knit.  I did make several mistakes along the way, but I think it came out pretty well.  I'll be happy to have it handy in September.  The yarn is a pearlescent tonal sock yarn from Knit Picks (http://www.knitpicks.com/yarns/Stroll_Tonal_Sock_Yarn__D5420134.html), 75% superwash merino and 25% nylon.  It's very soft! 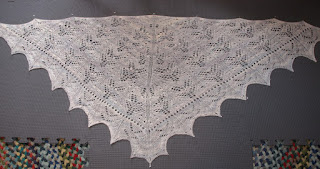 I'll be sure to show you a photo once the blocking is completed.

Unfortunately, there's been no weaving here since the table linens.  My poor loom is put away at present, because the room where it lives is getting a redo.  We affectionately call it the "toyroom," because when the kids were small we had a huge toy box in there.  It started out as a regular porch, back when the house was built in the 1870's.  Somewhere along the line the owners enclosed it and turned it into a room, complete with a windowed door into the kitchen.  When we purchased the house 25 years ago (!), we found that the room was overly warm, with baseboard heating on every wall.  The previous owners had also kept their dogs there, so there was a distinct "hot dog smell" to the place.  We took down the wall between the toyroom and the kitchen, and built a half wall between the two.  It's the room we use the most, right off the kitchen.  We did, however, notice that it was an extremely cold, drafty room once we opened it up.  No wonder they had installed so many heaters in there!

About four years ago my husband decided he would redo the room, and he took the short, southward facing wall apart and built a passive solar wall.  It is a mass of bricks, painted black on the outside, faced with a lexan sheet, and containing some duct work that brings warm air into the room.  It's very subtle, but it does make a difference on cold winter days.  The plan was to replace the other exterior wall the next year, to adequately insulate it and put in new windows.

The next summer, however, brought a leaking roof, so all of his spare time was devoted to, not just fixing it, but designing and building a new roof. After that, I think he lost interest in the project.  So, what we've been living with is this: 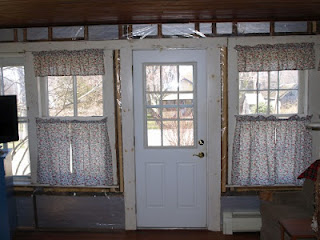 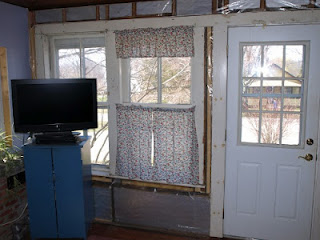 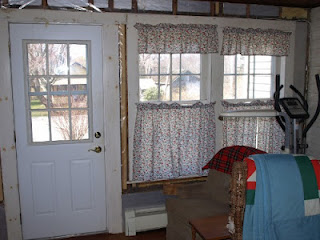 Not awful, but a girl can stare at plastic and foil covered foam board for only so long!  Plus, there were still some areas that were very drafty in the winter.  So I finally found someone to hire and come do the job right.  They are now in the process of rebuilding it after 2 days of demolition.  I think it's going to be great, slightly less bright because we're going down to two windows, but it will be a great place to sit and read, knit, and weave.  My husband says he'll be doing all the trim, but I've heard that before!  If enough time goes by, I will just rehire the contractor to get it done.  I'm on tap to do all the painting, inside and out, so I know what I'll be doing during my vacation in a couple of weeks.  Here are some progress photos. 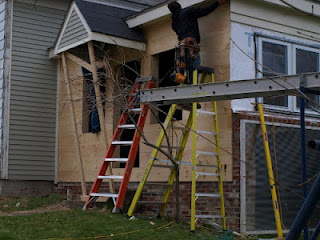 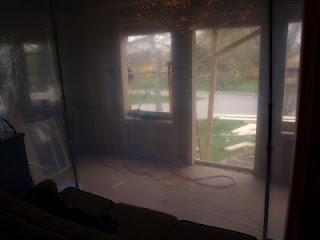 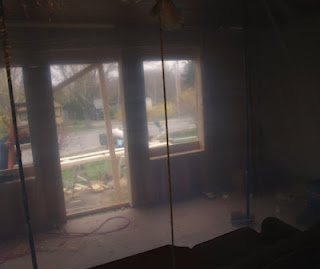 Sorry for the quality of the last two photos, but they were taken through the plastic wall that keeps the work area separate from the rest of the house.  Unfortunately, the next few nights are supposed to be very cold, so   we'll have to fire up the wood stove again.

And I apologize for the lack of weaving news in this post.  Maybe I should rename the blog!  Till next time...  And thanks for visiting!