Added to the Toolbox!

Here are some photos of the completed pinwheel tencel scarf.  My apologies for the horrible pics - I just cannot seem to take good pictures of anything red, especially a deeper red. 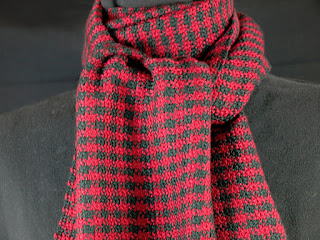 And a "close up" of the pinwheels: 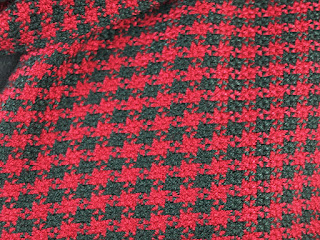 They aren't shaped like the foil/paper pinwheels of our youth.  They are more like sawblades.  Being woven from tencel, I was anticipating that the scarf would come out of the wet finishing terribly creased, needing the typical hard press to straighten, followed by a drying spell on the rack that I have.  This came out a bit differently, a slightly thicker material with almost no creases after washing, although it is still drapey.  I really do like the hand of this fabric. 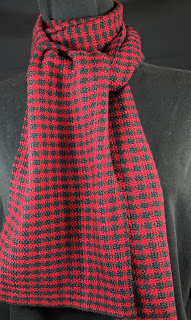 Lately I've been on a spinning kick, as you've no doubt realized.  I'm spinning some lovely fiber on my wheel (which I'll save for another post), but I'm also spinning on my spindle.  I'm trying a new-to-me technique, called plying on the fly.  Essentially it is spinning a single, tripling it on itself by pulling it through a loop, then plying them together, creating a 3 ply yarn that displays the colors in hand painted fiber without muddling the colors, all at the same time.  Clear as mud, no?  It's very much like making a very long crochet loop with your hands, then spinning the spindle in the opposite direction to create yarn. I've been trying to understand this for quite sometime, but haven't been able to wrap my head around it until now.  I rewatched this wonderful video http://www.youtube.com/watch?v=7Jc2tYkv_EU and now I get it!  I thought I'd show a few photos to give you an idea of the process.

First, I spin some singles (not nearly as long as in the video, BTW), winding the first two lengths on the spindle as usual. 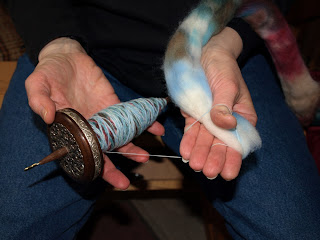 The third length I wrap around my left, or fiber hand, then continue to wrap the second and first lengths until they are all on my hand, and the loop from the previous chain emerges from underneath the whorl where it was placed after the last plying bit: 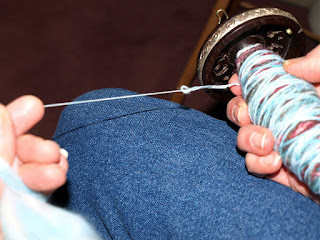 You can just see the curled up loop coming out.  I then open the loop while keeping tension on the singles: 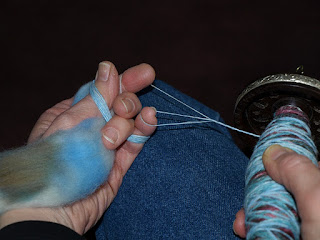 Then I place the spindle between my knees to hold it in place, grab the single and begin to pull it through the loop, just like you do in crochet: 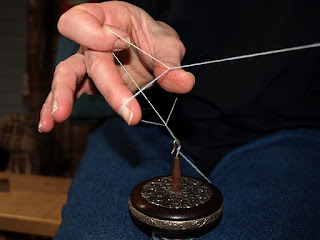 Continue to pull the singles through the loop, allowing them to come off your fiber hand while keeping some tension.  You can either pull them into one long length, or make many smaller chains.  If you make one long loop, you can drop the spindle to the floor and hold it between your feet.  I try to make one long one, because if there is a weak spot in this kind of yarn, it would be where the loop gets twisted into a ply, though I've yet to hear of anyone having any issues with this type of yarn breaking.  You can also make smaller chains to go with the changing colors of the fiber: 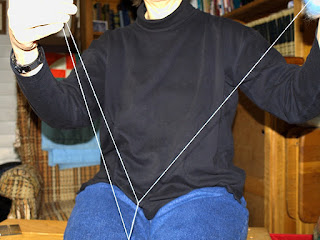 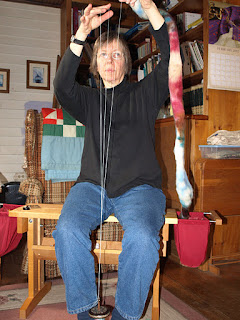 you hook the loop over a thumb or finger while holding the single, essentially putting them all together.  You then give the spindle a good spin in the opposite direction from the one you used for spinning, and you get plied yarn!  Here's a photo of some wound on the shaft of my spindle. 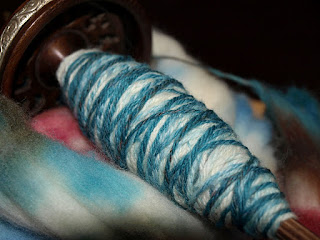 As you wind it, and the loop draws near to the spindle, you just carefully lay it on the yarn, right under the whorl, and cover it with a turn or two of singles, so that you can find it again after you've spun some more singles.

The whole process is a bit magical, though it certainly takes a longer time to get through the fiber.  The good news is that it is completed yarn when you're done.  Spun conventionally, you have to wind it off the spindle into a ball, spin another batch of fiber, get that off into a ball, then wind the two or three together into a plying ball, then ply.  So this is probably a quicker technique.  Plus it's portable, so that you can sneak in some spinning whenever you have a quiet moment. 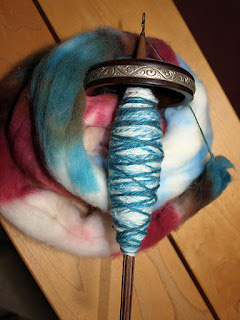 I'm glad I finally figured out this technique.  You can never have too many tools in your toolbox!