Ravelry is Just the Best!

Remember the handspun yarn I showed in last week's blog?  Well, it has since been knit up into not one, but two sets of fingerless mitts.  Nothing fancy, just a nice, plain, warm mitt.  Well, not entirely plain, since they were knit up with that very colorful yarn.

To recap, the yarn: 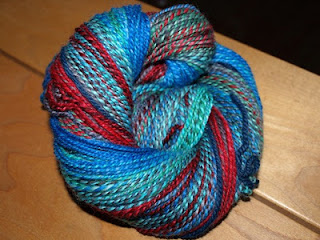 And now the mitts!

You can see the color progression if you look at the order in which the mitts were knit.  The first set 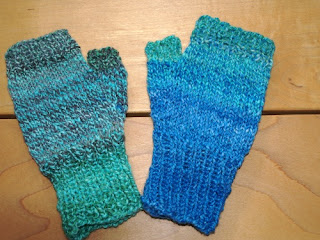 was knit starting with the bright blue in the cuff on the right, which was the first color in the fiber that was spun.  The upper ribbing and thumb on that mitt was knit in the yarn that was then used immediately on the cuff of the left-hand mitt.  Then the second set, which was knit in a slightly larger size: 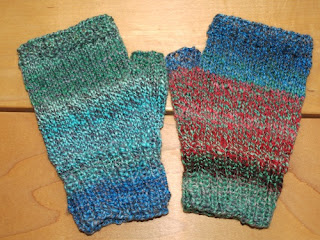 was started with the mitt on the right.  You can see that the cuff matches the yarn at the top of the left mitt in the previous set. Then the top of that mitt led to the cuff of the other.  It's nothing earth-shattering, but kind of interesting to see the color's progress.  At least it's interesting if you did the spinning!  Both mitts are truly appreciated now that the cold weather has arrived.

I have a new project on the loom, too.  It was meant to be a quicky project before I start to weave the table linens for the upcoming wedding in the fall, but it's not quite as quick as one might assume.  The draft comes out of the most recent Handwoven magazine (Jan/Feb 2012),  in their article on pinwheels.  In that article they mention the 8 different tie-ups you can use with the same threading and treadling to get various effects.  I've woven pinwheel towels before 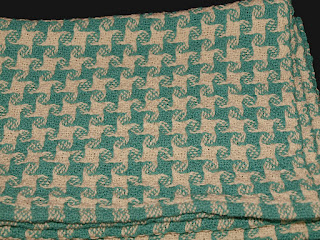 and I found that the biggest pain was having to change the weft color every 8 picks.  I didn't cut the weft each time a color changed, but tried to wrap the weft being woven around the loose, unused weft thus running the unused weft up the side.  It was quite tedious, so I only did it twice in each 8 pick weave.  That left wefts that showed a bit as they were carried up the sides.  People said they didn't think they looked odd, but it bothered me.

There is a Pinwheel weave-along going on in a weavers' group on Ravelry (http://www.ravelry.com/), and this issue was addressed by some more experienced weavers.  There is a really neat trick that allows you to take one of the wefts, after it has been woven for its 8 picks, and run if over the floating selvedge and 4 of the other color's warp threads, and under the entire scarf.  You then take the other weft, weave 4 picks, take the under-the-scarf, unused weft, bring it back under to its original location, pass it over all 8 of the other color's warps, rest it on top and then weave the rest with the other weft.  Confusing, right???  I had read about this before but could never picture it in my mind, but one of the weavers generously posted a short Youtube video that explained it so that even I understood!
http://youtu.be/MZ7E6pxDBcY

I'm only doing it on one edge because of the way I set up the stripes, (just like she does in the video) but I don't see why I couldn't do it with both weft colors.  It is such a neat trick, and really speeds up the weaving.  And that side has much neater selvedges to boot!

So here's a photo of my just started Pinwheel scarf, woven with tie-up C on page 50 in Handwoven.  They are coming out more like sawblades, but I love the effect, especially when woven with tencel. 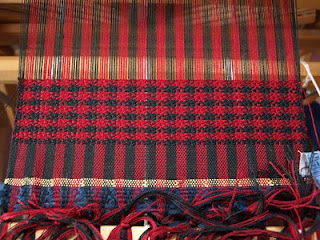 Happy weaving, till next time!