Wow, it has been a really long time since I updated this blog.  Life just got in the way a bit, and you know how easy it can be to put something off for just a bit more time.  Part of the reason I haven't posted is because of the "surprise" I alluded to in the last post.  That surprise is a new-to-me spinning wheel that I purchased from a lovely woman and fellow Etsy shop owner from NY.  It's a Schacht Matchless, and I love it! 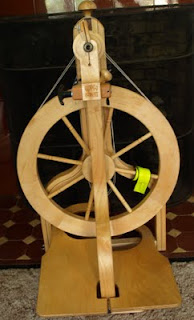 This wheel replaced the old Ashford Traveller loom that I had purchased off Craigslist a year or so ago.  This new wheel is a much nicer tool to use while spinning, and feels totally different than the Traveller.  It has more adjustment options, as well as three different systems with which to spin.  I jumped right on with some fiber that the previous owner threw in for free, and have been spinning ever since.  Here's the fiber I got with the wheel: 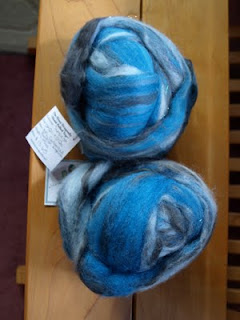 It's wool, carbonized bamboo and Angelina, a sparkly bit.

And here's the yarn I spun.  I found the bamboo difficult to draft out, so it has some thicker areas, but came out nice a soft: 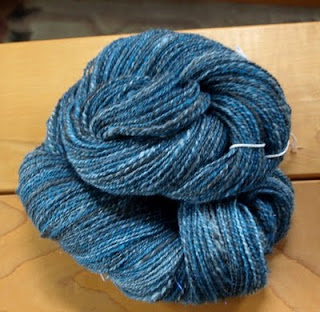 And yes, I'm partial to blues!

Next on the wheel, is this merino/silk that my hubby bought me for Christmas last year.  It is sooo soft!  I'm trying to spin it fine, hoping to make a lace weight yarn for a shawl.  Of course, that means the spinning takes forever! 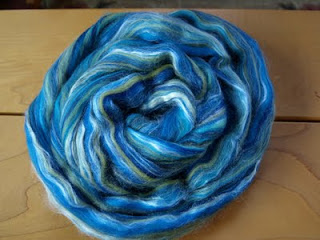 Problem is, I think I finally reached the limit on how many crafts one can do in the same time frame.  Hence, the "critical mass' title.  I want to keep spinning because I want to improve both my speed and the quality of my handspun yarn.  I want to keep weaving because there is just no end to the different patterns that I want to try, plus I need to keep my coffers full and have enough handwoven things to send off for consignment.  AND, as if that isn't enough, my younger son requested a handknit sweater.  He chose the yarn and pattern, and I am happy to comply.  The pattern is, well, pretty intricate in the cable department, so it will be a slower knit than I would like.  The pattern is called Hedge Fence Sweater, and I purchased it as a download on Ravelry.  This is a shot of the first sleeve. 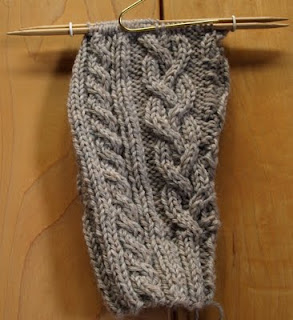 The yarn is from Knit Picks, and is relatively inexpensive.  It's called Wool of the Andes, and comes in several weights.  It is surprisingly soft, which cheaper yarns usually aren't.  Added to the extra project, is the fact that this is my second try at the first sleeve.  It wasn't the pattern than did me in.  It was "night nurse brain."  I needed size 7 needles, both circular and double pointed.  I actually knit  a swatch to check for gauge (shock!), and used the circ's as straight needles.  However, once I knew that the size 7's were correct, I grabbed some doubles that I had been using on a previous project that were held together by small rings - that is, they were not in my case.  I casted on, happily knitted away, realized that the sleeve looked a bit dense and snug.  It stretched fine, and I thought that maybe I was knitted a bit tightly, so I loosened it a bit, and let him know that the sweater would not be a floppy loose one, just to make sure he still wanted it before I started the next sleeve.  Yep, I knit the sleeve past the 18" mark before it dawned on my to check the needles.  I was using size 4's!!  Had to pull the whole thing out.  The weirdest part is, I realized this in the middle of my two nights of work, when my brain is the foggiest.  I have no idea why I thought of it then instead of when I was awake the entire week prior.  SO, by the time this sweater is done, I will have knit 3 sleeves.  It may be June before he gets it!

As for weaving, I finished a set of 6 towels in a nice simple pattern.  They're called Simple Towels for that very reason, and they worked up fairly quickly, though the last one was a bit short.  I wove 3 light blue, and three green. 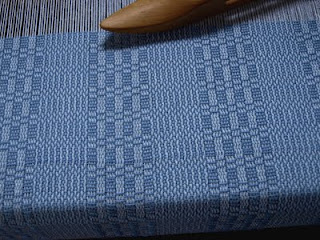 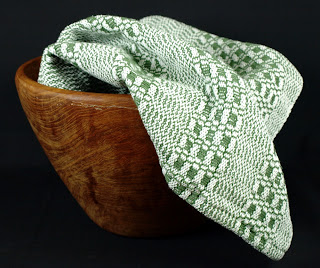 I'm now warping for some of the placemats that I've woven in the past, because the store in Gardiner that sells some of my things needs more stock.  After that, I have so many ideas that I can't seem to hold on to them, but I know a coworker wants a table runner, so that may be the next project.  Inbetween the knitting and spinning, of course!