The woven tea towels are finally done!  Well, at least the weaving part is complete.  I ended up with 10 towels, 3 of which have a bit of linen with the cotton, the rest are 100% cotton.  I had wanted this project to be a stash buster, and it was.  The last towel was partially woven with the remnants of some cotolin put on the shuttle without winding it onto a pirn or bobbin.  In layman's terms, there was very little yarn left.

The towels are still on the loom, but the cloth will be taken off tomorrow and the finishing process will begin.  Here's a couple of shots of the cloth on the beam, always a pleasant sight! 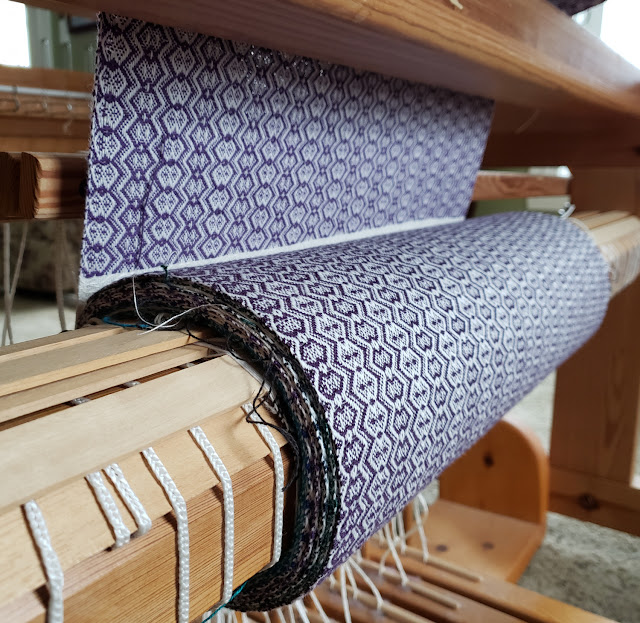 In this one, you can see glimpses of some of the different colors I used; 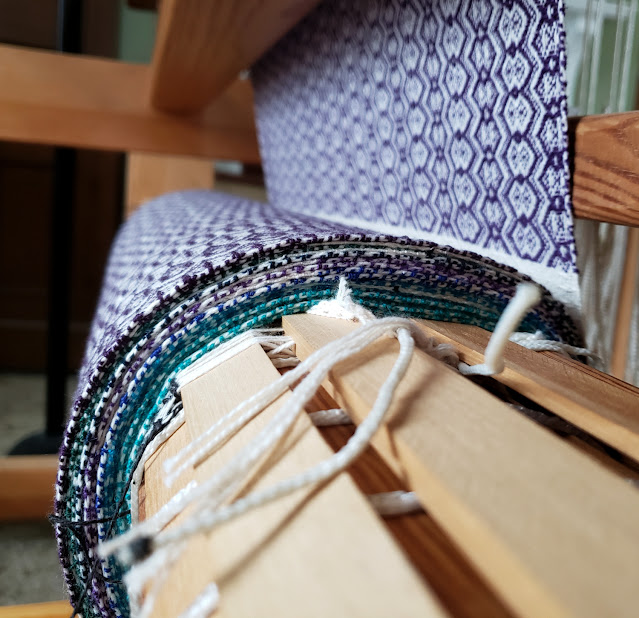 In other news, one of the reasons this project has taken longer than anticipated is that I contracted the dreaded Covid virus.  I have no idea how I got it, since I still am mostly in my house, with lone walks and once-a-week trips to the grocery store, where I have a pretty rigorous routine to stay "safe."  I was lucky enough to have a mild case; no fever or body aches, and my oxygenation remained good.  It did bring me to the point of having shortness of breath, which was pretty scary, but that didn't last too long.  I am still having issues with a very persistent, barky cough that is so bad in the evenings that I'm surprised pieces of my lungs don't fly out.  It has also affected the lower regions of my intestines, if you get my drift, and the combination of those two things has me pretty worn out at times.  I am out of isolation and have taken a couple of walks in my neighborhood, and I can feel the difference in my energy levels.  I am trying to stay positive, and hope that every day I'm a bit better, though I guess there can be some ups and downs for quite some time.  The best news is that I am not contagious and am considered immune until late April, unless one of the variants shows up - no one seems to know exactly what would happen then.

Hubby did NOT get it, which was pleasantly shocking, and to be truthful, he's a bit disappointed in that because he wants to be immune too, but I'm very grateful that he stayed healthy.  He is a bit older than I am and has a few medical issues, so his response could have been much different.  Hopefully with the increasing amounts of vaccines his turn will come soon.

It is heartening to see the national numbers coming down, though they are still way too high.  I'm pretty sure there will be another surge in a week or so because of the Superbowl.  We are not sports fans here, but knowing how so many Americans ignored all of the advice around the holidays, I have no reason to think that they will be responsible around this event either.  Sigh.

That's it for now, I think.  More to come when the towels are ready for their beauty shots.  Stay safe out there!