I am in the middle of my long-ish stretch off from work, often a time of productivity and accomplishment.  Not this week!  Hubby came down with a cold last week, which went into a pneumonia.  This happened just over a year ago, and we waited too long to get him to the doctor's office, so he ended up in the hospital for 6 days.  This time we were headed down that same road, because he wouldn't call for an appointment despite my urging, so I had to leave work early early on Friday and call and then take him.  He was put on an oral antibiotic, and is definitely on the mend.  So what did I get from the deal - his cold.  By Sunday I had the non-productive cough, runny nose and stuffy head.  No pneumonia, but I guess once you've had it, you are more likely to get it again.  Needless to say, this week has been all about a whole lot of nothing.

I did manage to take photos of the now-completed baby sweater this afternoon.  Mind you, these are pre-blocking.  From the back, unzipped; 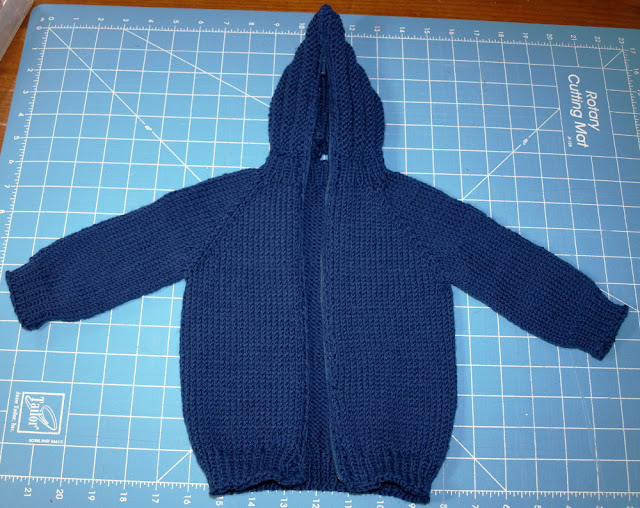 and the front with it's collapsed hood; 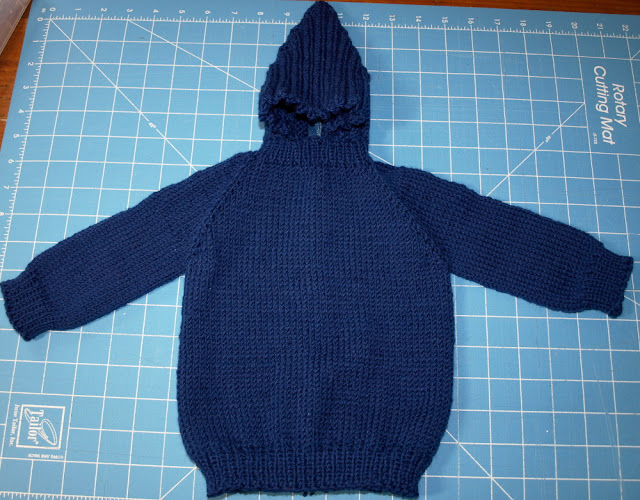 The sweater itself was very easy to knit, but boy, hand sewing in that zipper was a definite PITA.  Don't know if I'll do that again!

On the weaving front, I had to unthread almost half of the table runner warp.  I decided to thread from the middle out, so that I would be assured of plenty of heddles and the warp would be evenly distributed side to side.  The only problem is, I ran out of warp before the mid-point of the draft.  Oh no.  I was sure I'd done the math wrong, that I was 30+ ends short on one side.  With no other way to go, I took all of those ends out and started from the outside edge.  Come to find out, the middle of the warp wasn't where I thought it was.  Huh???  I still don't really know what happened there.  Did I mention I'm sick??  I ended up finishing threading this morning, and I was 2 ends short overall, which is very easily fixed.

Silly mistakes like that, plus the time every project takes, has really made me think about getting out of the biz.  I only do one show, and it's been good to me, plus I have my little Etsy shop, which does just about nothing.  After the craft show, I make a list of some of the things I would like to weave for the next one a year away.  I never make it through even half of the list, and it is a small list.  So who am I kidding??  With age I'm only going to get slower.  The problem is, if I don't have a place to sell, I'd have to cut way back on weaving, because I couldn't use/gift enough of my projects.  Then I might just get to the place where I'd barely weave at all.

One of the problems is that I just have too much to do every day, work or not.  And I don't see that changing any time soon.  At times, like now, I have let other things go, like much cleaning (yeah, I know - yay!), and exercise - not good.  I'm also trying to cut back on the time spent on the internet, but overall, it doesn't make much of a difference.

I'll just keep keepin' on, and wait until I'm healthy before making any rash decisions.  Thanks for letting me whine.