I've been moderately busy since the last post, weaving off the planned-for rug, and playing a bit with tablet weaving.

The rug was certainly a quick project, but it was fraught with indecision and uncertainty.  I had based my calculations on a similar project on Ravelry, which had 30% shrinkage.  I also messaged the weaver, who assured me that she did indeed have 30% in both length and width once the rug was completed.  I hemmed and hawed over the angle, wondering if it really would fit the space once the rug was off the loom.  I took a large piece of cardboard and cut it to fit the space, only to discover (er, remember) that not only would that not account for shrinkage, but that my big loom doesn't have a space over or under which I could hold the cardboard as a template - too many strings.  So I thought some more, did a bit more math, and came up with the brilliant deduction that a 45 degree angle should just entail decreasing in length at the same rate as in width - duh!  So, an inch of warp equaled 10 ends, and an inch of weaving equaled 6 picks; I just had to decrease by both of those equally.

Then my true nature, which is really quite hesitant and chicken-like, prevailed, and I just wove the rug straight to the warp's end, which ended up being a good thing.  I only had 8% shrinkage length-wise, and almost none in width!  I don't know why it varied so from that other project, but I now have a rug measuring 65.5" X 26.5." 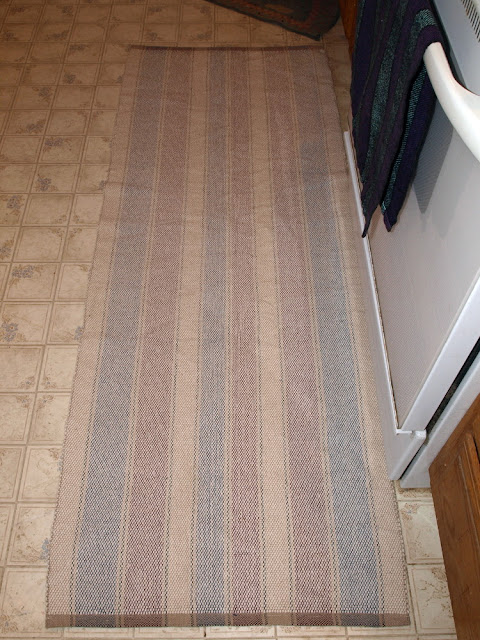 You can see how washed out the colors became, but I still kind of like it.  Unfortunately, the cats also like it, and even with a pad under it, I keep finding it bunched up in any number of configurations. So, for now, it is upstairs in the spare bedroom, where I store my yarn and smaller loom.  As for the problem corner, my hubby went to a local Job Lot and bought a small, inexpensive oval "braided" rug that fits the space nicely and seems too inflexible to be bothered by the cats.  Wish I'd thought of that before.

I also dipped my toe into tablet weaving.  I borrowed two of John Mullarkey's DVD's, "Tablet Weaving Made Easy," and "Double Faced Double Weave."  I watched them twice, and first decided to try the double weave because the warping procedure is waaay easier.  This is the resultant sample band, woven in 10/2 mercerized cotton.

I started with the Greek keys design; 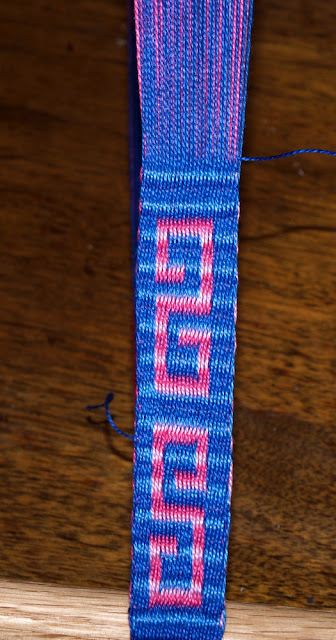 I really love how the design is mirrored on the opposite side; 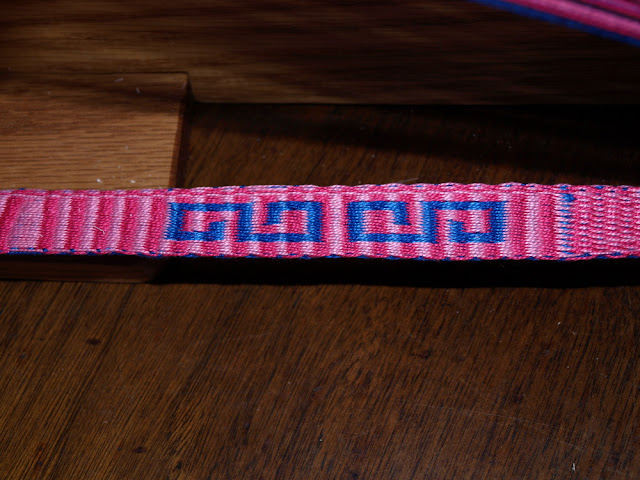 I then worked on some diagonals.  The first diamond needed to be restarted when I realized that I was weaving wrong side up (not shown). 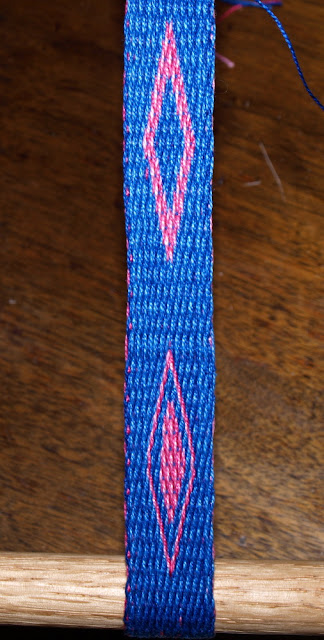 After that, I tried broken twill but got confused about the set up, so I just wove a few more designs and a couple of letters.

That undulating twill-ish design in also woven wrong side up, by the way.  Here are a couple of letters along with some diamonds and the Greek keys.  I'm not really sure why the "w" is so elongated... 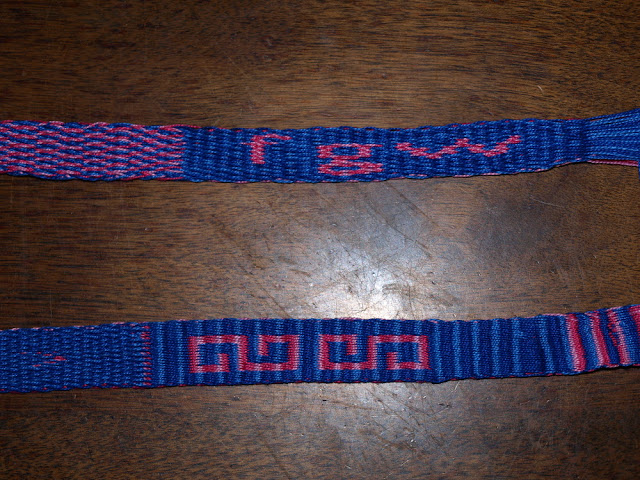 One of my goals is to weave a key fob for my son's birthday using tablets to weave the letters of his name, but since his birthday is on the 26th, I may miss that window.  I'm not sure how many ends will be required for a band to fit the hardware, and the different fonts available require anywhere from 24 tablets to more than 50!

Today I started to warp for a "threaded in" tablet design, which is slow going for me and a bit frustrating.  The weaving part should be easier and quick, once it is warped.  I'll have to blog about that next time.

That's all the weaving news I have for now.  My next big project may be some huck baby blankets, or more towels.  I'm really trying to slow down a bit since the big software update at work is happening soon and the stress level is through the roof over there.  I don't need to add to that here at home.

No photos, but a slightly amusing story.  I was at my computer the other day, when I heard that very distinct meow that cats make when they've caught a mouse and want to show you.  Now, my cats are indoor cats only and neither one has ever caught anything.  (I know that meow well from our years with outdoor cats).  So I looked over, and Dinger, my former father-in-law's cat, was coming from the bottom of the stairs with something dangling from his mouth.  He kept meowing, and came closer so he could carefully set down his prize.  He then looked up at me ("Look, Mom, look!  See what I brought you??), and then carefully pawed it a bit.  It was  not a mouse, thank goodness, but some leftover dyed cotton from my last wrap warp, complete with the numbered tag still attached. Turquoise, no less.  Somehow, he had gotten into the spare bedroom and decided this small, loose bundle of soft, turquoise cotton was a thing he should conquer and deliver to me.  Gave me a chuckle.