After my last attempt at tablet weaving, following the samples in John Mullarkey's workshop DVD, I decided to try to weave a threaded-in design from his blog.  True to his information, the set-up took awhile, as each card has to be threaded individually, both in color and direction of the threading.  After tying on, the warp looked like a tangled mess. 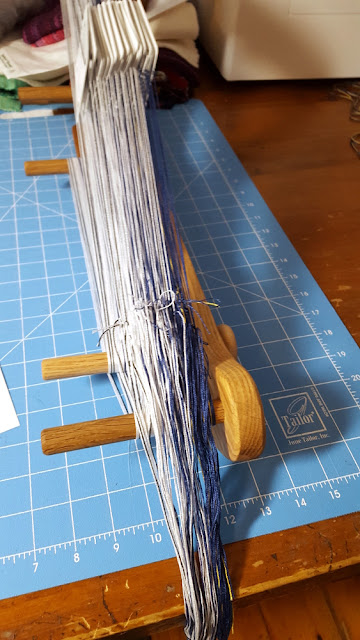 Hard to believe that anything orderly could come from that!

I very carefully followed his draft, started weaving, and....failed miserably.  Instead of getting the white, snow-covered trees against a dark blue sky with yellow stars, I got misshapen dark blue trees with spots of yellow, against a white sky.  And because this is a threaded-in design, the opposite side of the band is not the exact opposite of the front.

So, I went through and changed the cards, one at a time.  Tried to weave again, and failed.  Now, I'm pretty hard on myself, and my gut said to walk away, cut if off, put tablet weaving in the "I can't do this" scrap pile.  But I decided to give it one more try, and went one card at a time, making sure that it followed the draft exactly, and to my amazement, it worked! 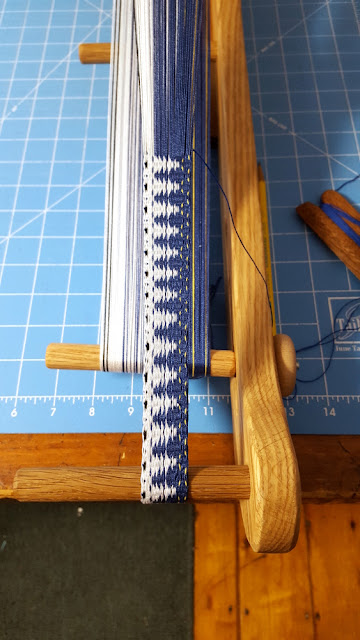 It was such a joy to see the trees appear, one after the other.  (Now, I know that you can still see blue trees with yellow dots and a white sky, but the earlier attempts were not this).  I even got to the point where, when I got off track, I could see what I needed to do to fix it.  The weaving almost became mindless.

As the band progressed, I got a good look at the underside, and almost couldn't believe my eyes. Does anyone else see the blue Tardis, from Dr. Who??? 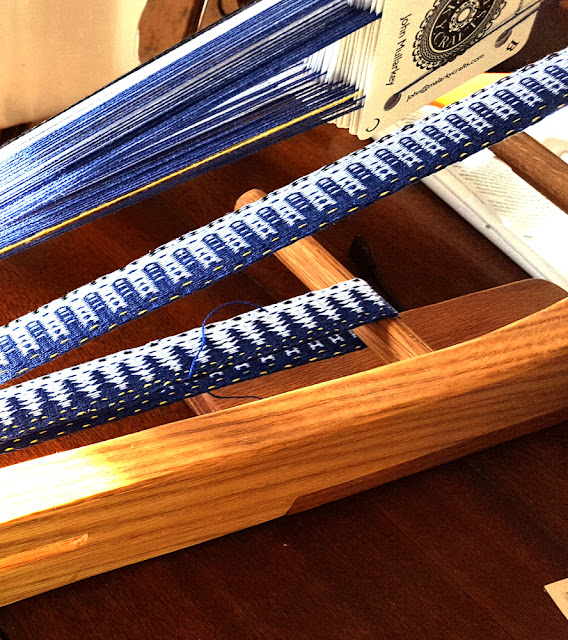 Now, I'm not a fan, necessarily, but my second son went through a phase where he was all about Dr Who, so he "had to" show me some episodes.  As a matter of fact, for one of his birthday/Christmas gifts that year, I knit him a Tardis sleeve for his Kindle Keyboard, and he loved it.  The few places I posted this photo did generate excitement amongst Dr Who fans.

The band is off the loom, wet-finished and dried.  It really makes a difference in how flexible the band is, I have to say.  The pattern calls for 30 cards, so 120 ends, and I used Astra 10/2 cotton.  The band ended up being 7/8" wide, by 51 inches, warped around the shortest distance on my Harp inkle loom.  Here's the link to the page on John Mullarkey's blog where you can find the drafts for this and other holiday bands.

After this, I made an attempt to do a double-faced woven band for a key fob for my first son's birthday, but had a major problem with the tension peg not staying parallel after warping.  As a matter of fact, you can look at the second photo, you ca see the tensioning peg is off parallel.  Unfortunately, the letter draft I wanted to use requires 44 cards, so after attempting to work around the problem, I ended up cutting it off the loom and tossing it.  Hubby is now trying to modify the tensioning peg, and I'll have another go at the draft soon, I hope, though not in time for his birthday.

I'm also warping for some network twill scarves that have been on my to-do list for ages.  Tencel, 242 ends, 2 scarves, which I will weave on the small Baby Wolf loom.  Also on the horizon will be some turned taquete towels.  I seem to be slowly getting my weaving mojo back!