The weavers' competition piece is done!  Washed a total of three times, photographed to within an inch of its life, it is safely tucked away until the voting is complete.  This finally allows me to start another project, one with a deadline, which I dislike.  I already put a lot of pressure on myself in most aspects of my life, so I don't need additional pressure, but a shop wants 6 towels by the end of April/early May, so I'd best get cracking.

The towels are going to be turned twill towels, similar to these that I wove last year. 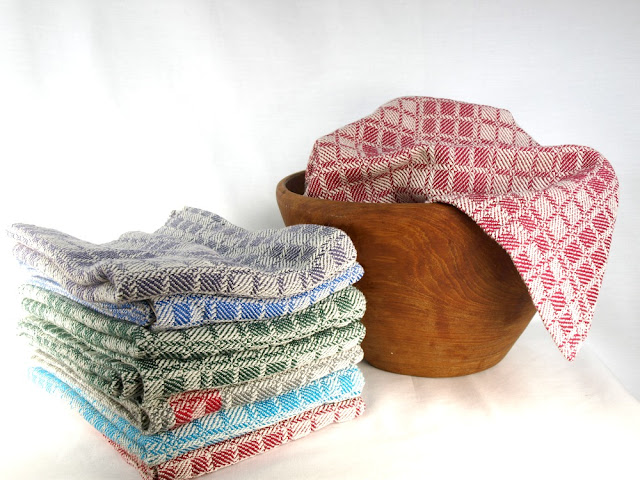 I'll be using 10/2 mercerized natural cotton for the warp, and several different colors for the weft.  Six for the shop, and six for my shop.  As I look forward to the Portland craft show in late August, I really need to start stocking up, and towels are always good sellers.

Instead of winding my warp on my warping board, I thought I might try to use my mini Square to wind the chains. The configuration that I've used before, with it mounted on my back beam on the big Glimakra, would not work for chaining, so my hubby slapped together this stand, which is based on the original Square's design. 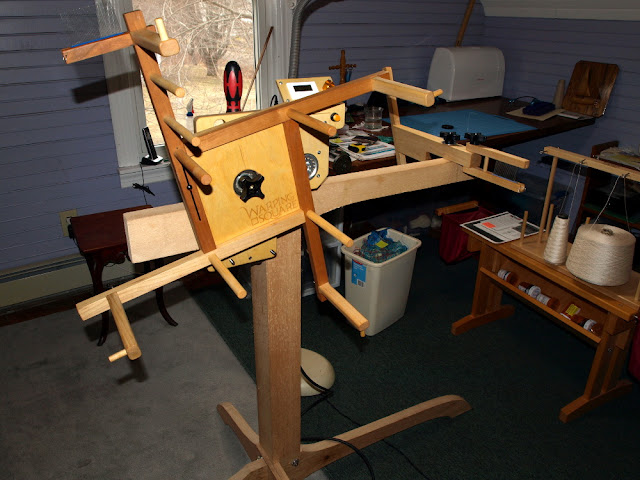 I clamp the separate arm onto the end of the long extension arm, and can put the mini reed there when I am ready to pull the warp off.  It works a treat, but surprisingly, it seems slower to use than my board.  Maybe because each revolution is only one end, while the board makes two ends each time you return the yarn to the beginning peg?  But, on top of that, because I have to cut the yarn to take it off, I have to have a knot at both ends, which isn't great for back to front warping.  I've only gotten 2 bouts finished, and am debating winding the rest on the board, but I think that either way, I will end up with lots of tangles to deal with - not fun over 12 yards' length.

The weather here in Maine continues to be skewed.  We are having a second day of temps in the 50's here on the midcoast, which is way above normal.  Yesterday, several Maine cities hit 70 degrees!  I have to admit, I was a bit jealous of that, but 50's still let me take long walks without freezing, so I'm happy with that.  We're due for some rain tonight into tomorrow, then a very nice weekend. I have to work Friday and Saturday, but look forward to getting outside again on Sunday.

More pictures next time, I hope!