My latest project, handwoven towels in a summer and winter pattern (more on that later), has made me realize that I need to make a section of my Etsy shop a "factory" seconds area, where people can buy things I've made that are structurally fine but have a design mistake.  I can't seem to make a run of anything without at least one item having  a glaring error.

For instance, this latest project, was supposed to be 4 towels, 2 blue and white and 2 green and white.  They are woven in a very fine cotton that would make great guest towels or wedding gifts.  The pattern, summer and winter, just means that every shot,or pass, of the shuttle has to alternate with a "ground" yarn in the pattern section.  So, if the body of the towel is white cotton, and the pattern area is blue, while making the pattern you throw a blue shot, then a white cotton shot in a plain weave treadling, then another blue in another blue pattern treadling, then a white...  Hard to describe clearly, I know.  So let's go to the visual: 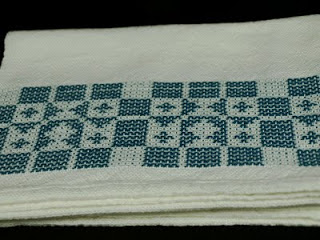 You can see the white in between the blue, but mostly the blue shows, making the quilt-like pattern.

Here's what happens when one forgets to put a white shot between the pattern shots: 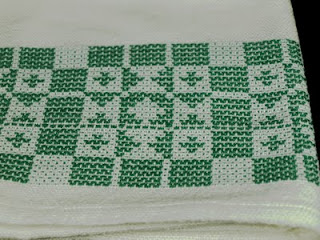 You can see the little railroad track-like line where the mistake is.  Other than that, the towel is fine.  The other end has the pattern rendered correctly, so one could hang it strategically putting the mistake against the wall.  Mistakes like this are so annoying.  I know my things are hand made, but the errors that I'm regularly making are just not acceptable to me.  Hence the idea of a "seconds" section.

All in all, this project was not my favorite.  The yarn was much finer than I am used to, so it took much longer to weave (although I do like the finished project's texture).  The patterned areas took alot of time and concentration to weave as well.  And the other green towel is a total bust, since the yarn on one of the bobbins was not white at all.  It was off white, which I didn't notice until I ran out of yarn and started a new, white bobbin.  Big, glaring mistake. Not sellable to anyone, ever.  It got relegated to my drawer.  SO, all that work and only 2 towels worth putting in my shop.

I think I'll weave some scarves next.  I definitely need a break from towels.